Disney’s Planes franchise (yes it is a franchise) is one of the most underrated franchises in the studio’s library. Even though the film shares the same universe as Cars, Planes didn’t exactly fit into Pixar’s mold, but still found a home over at Disney’s smaller studio DisneyToons. The first Planes was funny and heartfelt, and while it does have some familiar talent, it doesn’t have the A-List talent we are accustomed to seeing. So Planes is continuing being its own brand of fun by having a sequel, Planes: Fire and Rescue, which was a relative hit at the box office. Now that the DVD/Blu-ray is scheduled for a November 4 release, we are taking a look at whether or not it is worthy of being on your home entertainment shelf. Hit the jump to see if it does.

Planes: Fire And Rescue film review:
We already shared our thoughts on the film, and here is an excerpt from our review:

Dusty’s plot of redemption is a nice one, and as aformentioned it has been done before, but the greedy superintendent (John Michael Higgins) who is trying to promote his resort subplot is very unnecessary and only hurts the film. But much of that subplot is an afterthought thanks in part to the film finding a way to focus on Dusty’s training, and the firefighting.

The shocking part of Planes: Fire and Rescue is that it introduces the idea that these characters can die. While that notion has been seen a couple of times before in previous Disney animated films, it doesn’t hit as hard when it is for a film with such a young age demographic. I’m not even sure if the young audience will understand the concept of death, as the characters are talking about it but never really addressing it. While it is a bit of a dark subject to talk about, it does provide some great character insight and allows for great character growth. For as long as Dusty is struggling in the film, he will be inspired by either his own plight or other characters pushing him to be a better plane. 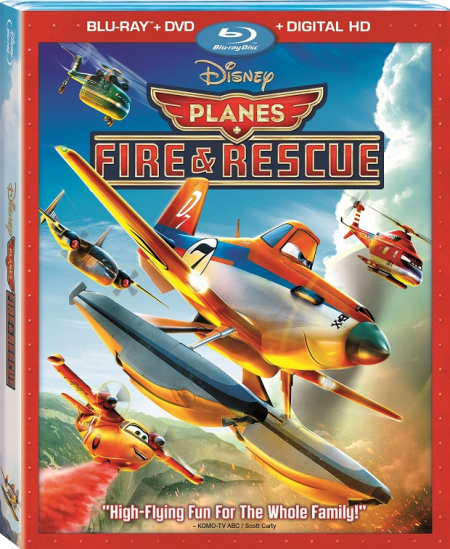 Planes: Fire And Rescue DVD/Blu-ray Extras review:
Vitaminamulch: This is a five-minute short about how a nasty mulch screws up an air show. It’s a sweet and cute video, but its less than memorable.

Welcome to Piston Peak: A 2-minute “vintage promotional film” about the national forest that the fire planes protect in the film. It’s a very informative extra that is a great inside look at the vehicles that inspire the film.

CHoPs TV Promo: A very brief promo for a TV cop show Ed Harris’ character Blade Ranger was supposedly involved in. Something that is more of a clip that didn’t make it into the final cut.

Air Attack: A five-minute featurette about the filmmakers meeting the real plane rescue workers. A great piece on the actual people who help fight forest fires with these aerial vehicles.

Deleted Scenes: About 4 minutes of unremarkable deleted material, introduced by the director and the producer.

Animated Shorts: Brief promos introducing some of the characters.

Planes: Fire and Rescue DVD/Blu-ray Overall Thoughts:
Though the film was fun to watch, it was only fun to watch once. Plus the DVD/Blu-ray extras aren’t really made for an adult audience, unless they want to relive their childhood dreams of being firefighters. So, Planes: Fire And Rescue with the intent that it will be for your kids.

You can purchase your own copy of Planes: Fire And Rescue over at Amazon or your nearest retail store on November 4.