Christopher Nolan’s next film, Interstellar, opens this Friday in theaters and IMAX. The cast has been traveling around the world, giving press and moviegoers alike insight into the mysteries of the film. On Wednesday, November 5th, the cast will sit down in a Google+ Hangout on Air from the Smithsonian Institution in Washington, D.C. to take questions from a panel of YouTubers and fans. More info after the jump!

Matthew McConaughey, Anne Hathaway, and Jessica Chastain will chat with Entertainment Tonight host, Kevin Fazier, in a Google+ Hangout to discuss the film, answer questions submitted by fans, and show clips from the movie. The Hangout will take place from 2:30pm PT/5:30pm ET-3:30pm PT/6:30pm ET.

Popular YouTubers from around the world, such as Anna Akana, VSauce3, Casey Neistat, DJ Flula, and What’s Trending‘s Shira Lazar, will join the conversation. Astronomer Natalie Batalha, who is a part of NASA’s planet-hunting Kepler mission will also join the Hangout.
Fans who participate in the Hangout will also get access to the ‘Interstellar Showcase App’, featured on the film’s Google+ page. This will allow fans to purchase tickets directly from hangout. 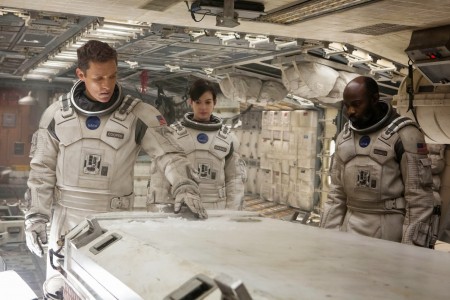 More on the Hangout from Paramount:

The Interstellar Google+ Hangout on Air program is part of Google’s collaboration with Paramount Pictures for the first-ever multi-platform partnership with a film that features initiatives delivered across Google platforms, including Google for Education, Google+, Google Play and YouTube. Together, the companies are helping moviegoers connect to the film through immersive experiences, exclusive content and detailed information on how to see the film, find showtimes and purchase tickets.