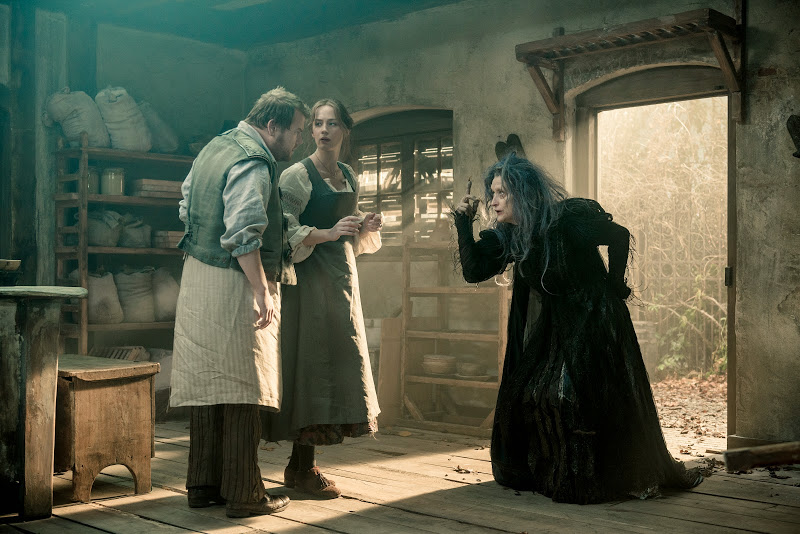 The holiday movie that has a draw for everyone is Disney’s Christmas release of Into the Woods.  It’s  Rob Marshall’s (Chicago) adaptation of Sondheim’s broadway gem that showed audiences that happily ever-afters can be trickier than–well what we’ve been led to believe.

It’s the fantasy assemblage of some of the screen’s hottest names led by Meryl Streep as the Witch with Emily Blunt as the Baker’s wife, James Corden as the Baker (You don’t him now but you will soon), Anna Kendrick as Cinderella, Chris Pine as the Prince, Christine Baranski as the Step-mother, Tracey Ulman as Jack’s mother and Johnny Depp as the Wolf.  The rest of the cast is filled out with fresh talent that rounds out the ensemble in this musical triumph.

In short, the film centers around the classics fairy tales of Jack and the Beanstalk, Cinderella, Little Red Riding Hood and Rapunzel but are tied together by a curse. See, the Witch placed a curse on the Baker’s family line after his father stole from her garden for his pregnant wife. She took the baby and prevented the household to ever produce another child and this spell got passed down. So the Baker and his wife strike a deal to break the curse by helping the Witch break her curse and it’s by collecting integral pieces from the fairy tales that surround them in the woods.

Blunt and Corden are an endearing pair and our eyes into the stories that surround them. You root for them as they collect the pieces and want them to have the child they yearn for. Oh, Emily Blunt even in the fairy tale world you’re still doing Meryl’s bidding.  Streep slays as the Witch. Her role is a testament to her range. She relishes the wickedness in which she challenges the Baker and his wife but imbues a fragility to how absolutely vulnerable she is in her fear of losing Rapunzel as her daughter. Her performance of ‘Stay with me’ is utterly heartbreaking.

Everyone shone in their musical numbers, each player just enjoying the fantastical material given. Chris Pine and Billy Magnussen’s performance of “Agony” was over the top fun and hilarious. Johnny Depp as the wolf in his number was just the right about of unsettling and sly juxtaposed by Lilla Crawford’s Little Red matter-of-fact innocence. Anna Kendrick’s dulcet timbre both embodied how a princess should sound even through her ironic doubts about the prince in her lyrics.

Into the Woods’ cinematography was lush and its environments brought to life the static pieces from the play. The beanstalk and the effects of the giants were delightfully reminiscent of fantasy films of yore and comical like Monty Python. Especially the bits with Tracey Ulman. There were wonderful set pieces like Rapunzel’s tower and hair–oh and not to mention Meryl’s hair in the second act! That chalked blue and purple was utterly vibrant. The costumes were beautifully detailed and need to be cosplays at conventions. There should be Act 2 witches and gold dress Cinderellas.

Overall, the film balances all of it’s elements in another solid musical picture from Marshall. The dark turn it takes in the second act brings gravitas to the moral of the story of being careful what you wish for. Seeing all the characters break down to their true selves is a reflection of how people sometimes do get lost in the world. It’s refreshing to see the mouse house embrace that these tales can be complex and not always end as you’d expect. It pokes fun at the tropes of the fairy tales it’s known for while updating to reflect modern times by being self aware.

Into the Woods opens Christmas day!