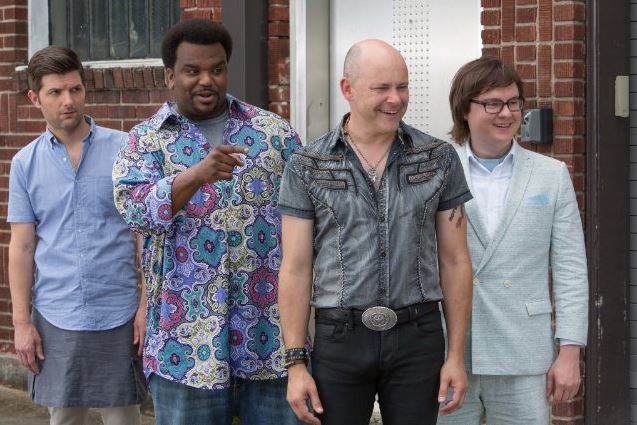 Hot Tub Time Machine 2 opens today. The cast  and creative team behind the cult classic comedy sat down to discuss the film and the origins of the where a lot of your favorite inside jokes came from. The second one’s premise takes the guys into the future minus one familiar face and we get a new world of instant laughs. Learn about new characters and where old characters went and whether we’ll be seeing more hot tub action in the future. Rob Corddry, Clark Duke, Craig Robinson, Adam Scott, Gillian Jacobs, writer Josh Heald and director Steve Pink give us some insight about this weekend’s dip into the Hot Tub.

Question: Hey guys, Adam, I was wondering if you could talk about what it felt like to join this cast and be part of this franchise?

Adam Scott:  Before I answer that question I just need to consult with my attorney, sorry. (Rob Corddry leans into his ear and starts whispering) I really enjoyed joining this film. (Rob leans in) Rob Corddry was especially generous on set.   And I loved the first, sorry (Rob leans in again).   No further questions, thank you.

I loved the first  one. I  was actually at the premiere of the first  one, not to brag.  I got invited, okay.  And actually had a conversation with Steve, I’ve  known all these guys for a while so I actually had a conversation with Steve on the phone before they – before Josh had even written a script and agreed to do it then which is such a stupid thing to do.

Movie Viral: As far as the script went, how did you guys choose what bits stay and what goes? Is there a lot of improv while shooting? Also is traveling back in time to see what happened in Cincinnati off the table in the next one?

Steve Pink:  Nothing is off the table when it comes to Cincinnati.  Josh doesn’t let the actors improvise.

Rob Corddry:  Not at all.

Rob Corddry: Well Josh writes honestly; Josh writes great bits that inspire because it’s all very conversational.  The real movie is us just hanging out and either giving each other shit or, you know, just hanging out and Josh writes that really well and it’s also it offers a great place for launching off into just other versions of that same joke, you know.And a lot of it was like the mirror thing with the minor Tyler Perry character.  That was about four hours in front of that mirror just staring at each other trying to insult your best friends.

Q:  My question is for Adam and Gillian,  what was it like to play such a sickeningly sweet couple?  And so you know couples like this and kind of pull from that?

GILLIAN JACOBS:  I only know dysfunctional deeply unhappy couples so it was pure imagining. [LAUGH] But Adam is pretty lovable so it’s not difficult to conjure that kind of relationship.

GILLIAN JACOBS:   It was really fun.  We didn’t really talk about it or rehearse anything.  We just started doing it and they just became disgusting [LAUGH] and so inlove with each other.  But it was also kind of written that way and it was a great place tostart because then the relationship becomes corrupted.  So it was just kind of a naturally great place for the relationship to start.

Q:  This question is for Mr. Robinson.  So how did you come up with the strut and how much influence did you have with the musical aspects of the film?

CRAIG ROBINSON:  The Weber strut was influenced by a young lady.   She’s a singer, striking and she’ll be at the premier actually.  And one day I was at this club in L.A. and she was just like just going in on this and I just started doing it with her. And then as far as the music we went in there and wrote the song together for the Weber Strut, Josh and Steve and Chris who was doing the music and then Steve left, he had to go do something.  Steve was always fucking leaving, but he had to go do something and he was like ‘well I’ll be back’. And sure enough he came back, but we had cut a song that we liked, right?  And then itwas like we had time before Steve gets here so let’s cut a BS song, right and then play it for Steve and watch his face.  So we made the worst lyrics. And it was like, I mean I was just singing all off key as we played it for Steve in the video and Steve is like ‘this is really good’.  It was like no Steve, no.  And then we ended up like fusing those two songs together.

Movie Viral: What are some of the origins of the popular inside jokes like ‘Great White Buffalo’ and ‘Lougle’?, which ones do you hear most frequently?  Which friendisms do you hope will kind of get popular after this second one?

Craig Robinson: People shout Great White Buffalo all the time.  I have to remind them, ‘you have to whisper it’.  But I’m looking forward to like just high five.

Rob Corddry:  And that’s just something that you did pretty late into the shoot. You just did it once and we knew exactly what he was doing.  It was great, great.

Clarke Duke: And that’s my real response in  the movie. Did you just fucking say hi five? Are you too lazy for this?

Rob Corddry: That was a real moment.

Steve Pink:   You guys were doing it off set also.   It wasn’t even like in the movie and then it became, ‘why don’t you do that?’ and it became a thing, yeah.

Craig Robinson:  Cincinnati was improvised by the way.

Craig Robinson:  Yeah, Great White Buffalo, they were just, yeah, that was just the reaction to that.

Q. In one scene, the trench coat that was left next to the hot tub, was that a way – it seemed like that wasn’t explained.  Was that a way to maybe open the door for John Cusack to come back in a later, maybe another Hot Tub Time Machine?

Steve Pink:   Yeah, I mean I kind of feel, well first of all the deep drama of this movie I think is best answered by Josh, but I will say that – I will say that like Hot Tub  kind of exists like the Avengers in terms of its, you know, in terms of the universe so like I would say that John is like Thor or like Iron Man or-