I didn’t like the Batman v Superman trailer. The usually brilliant Warner Bros seriously dropped the ball here. They announced a date for the trailer launch and invited people to sign up for tickets; yet failed to anticipate the Star Wars event.

Then comes the leak of bootleg, mobile phone video footage of THAT trailer for Batman v Superman. Cue today’s ‘official’ release. Zack Snyder is imploring people to still watch the IMAX reveal of the piece. What a mess.

All of that would be easily overlooked IF the trailer were somehow possessed of joy or imagination or indication of good old fashioned comic book FUN. Those essential qualities are absent without leave.

I do not want Sound of Music meets Care Bears. I KNOW Batman is ‘dark’. That’s why I love the character and his mythology; but it’s not the only reason. I like the lifestyle of Bruce Wayne; the cloak and dagger dualism and the trappings of the joint status as powerful playboy billionaire come brooding romantic hero turned legendary crime-fighter. EVERY iteration touched on the core aspects I have cited, from Tim Burton to Chris Nolan (yes, even Joel Schumacher; stop giggling; Batman Forever is great!).

Batman uses darkness; he does not relish it. He is the way out not the way into the murky underworld of moral uncertainty. And you can capture that in one teasing shot in a trailer. Zack Snyder alas fails to do so. He goes through the motions, sure. We get Batman standing on a building and looking at the Batsuit in his cave. But that’s neither compellingly new nor comfortingly familiar. It’s nebulous ambiguity.

Superman is a beacon of light, though? I would have thought the whole dramatic conflict here is to show a war of method. Where Batman harnesses the dark against those dwelling therein; so Superman is the one to bring people to the order of the light. Gotham City should be a portal to Hell; Metropolis a snapshot of some Utopian ideal (the challenge being to flip those perceptions as the two heroes meet and clash).

Superman here is portrayed as a source of fear. He is being persecuted, Christ like but in an oddly demonic demeanour. The bringer of light and joy is somehow draped in darkness; his red laser eyes cut menacingly into the night; his image etched across the city like some cultish fiend. Do that with Batman by all means (Dark Knight Returns: the superb graphic novel uses that exact motif). But why reverse the dynamic?

If it’s a bid to be clever or film Frank Miller’s work by stealth, then Snyder and Warner Bros have seriously misfired. This does not look like family friendly fare. This makes Nolan’s Dark Knight and Marvel’s Daredevil look like episodes of Little House on the Prairie.

There is a token attempt at some warmth, via a fatherly voiceover from Alfred the Butler to Batman. Yet even that is somehow fluffed; via possibly THE worst case of miscasting in the history of miscasting. Jeremy Irons is great at playing narcissistic villains and sexual dysfunctionality. But the wise, caring mentor? No.

There are moments of excitement. The suits look great. Affleck and Cavill are in top shape and the confrontation WILL be epic. Yet, without glimpsing other assets (Lois Lane? Lex Luthor? Aquaman? Wonder Woman?), and also thanks to its pervasive tone of gloom, I fear the worst from this trailer. It does not inspire joy or fun.

But as Commissioner Gordon might say ‘I’ve been wrong before’. Perhaps Trailer 2 will change my mind? It did with a little film called Star Wars: The Force Awakens so it might just be second time lucky again. I have faith in this project.

I always shrugged off the ‘they’re just copying ‘Marvel’s shared universe’ or ‘Man of Steel was not a hit so they called in Batman’ accusations: both were cynical slurs. Zack Snyder IS a visionary. And this film DOES have some genuinely interesting selling points. They just failed to show them to the max in this less than ‘super’ trailer. Let’s hope we can see the dawn in the darkness soon. 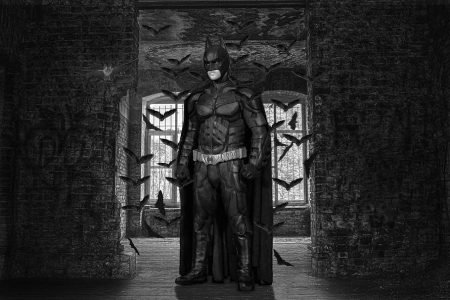