Crystal Skull seemingly finished the series. Hero married off; Fedora tentatively put away. But all the series’ films offered self-contained conclusions. Riding into the sunset from Last Crusade. Walking down Washington steps in Raiders.  It’s a flexible continuity. Minimal strands of connection through character beats, motifs and moments of magic, mystery and menace. That formula can return.

As to when part 5 gets made and who /what is involved? Here’s our wish come prediction /possibility list. 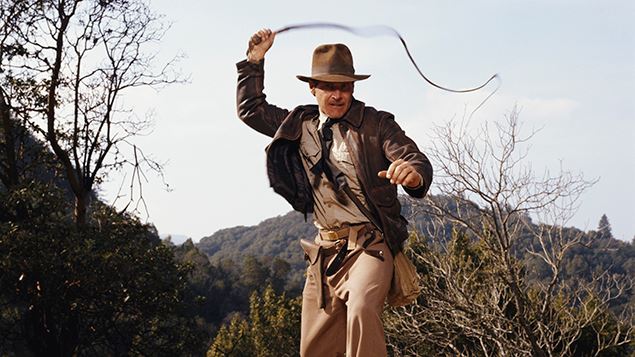 HARRISON FORD IS BACK

Indiana Jones is not James Bond. He’s untested in re-casting. The late River Phoenix alas does not count, though he’d have been great in further adventures post Last Crusade. Harrison Ford IS Indiana Jones. It’s his distinct charm (laconic delivery of intellectual lines; credible delight in action scenes) that largely defined the character.

Ford MUST be in this. He’s up to the challenge. The man arguably looks MORE comfortable in his own skin doing this type of thing now (contrast the new Star Wars trailer with his whole weary demeanour in Crystal Skull). As for real-world action hero credentials: the man survived a plane crash with aplomb earlier this year. He can still raid tombs and credibly confront the supernatural.

Age IS a factor (Ford is pushing 73). Watching him race through a sequence of action scenes would be a stretch; ditto his featuring in the series’ more romantic elements. But we don’t want Indy in pipe and slippers or bookending the story with ‘when I were a lad’ style flashbacks and reduced to solving purely academic puzzles. How to involve Ford?  Can he be Indiana Jones without actually playing the eponymous hero?  ‘Ex’ marks the spot, perhaps? Answers are found on the next stage of our trail.

The story (probably from Indiana’s creator, George Lucas; though Lawrence Kasdan would be a welcome contributor to the script) must hinge on a quest for a supernatural artefact. There should be religious, mythological dimensions. Biblical. Old Testament.

Essential also: synergy between prize and personal development. A reconciliation with a father / similar figure; romantic redemption; awakened vocation. That requires both a worthy adversary and powerful ally/mentor to motivate our hero.

Why not combine those roles? Cast Harrison Ford as Indy’s first great mentor, Abner Ravenwood. The conflict that ensues (with young Indy perhaps chasing Abner’s daughter, Marion?) plays into the central story. Abner becomes one of the film’s antagonists but not necessarily the ‘big bad’, whilst lending his estranged protégé a few style points along the way.

Ford would still be playing Indiana in all but name, without having to carry the whole film or be side-lined into some depressing Grandfatherly cameo. He’d have fun, too. Think What Lies Beneath/Mosquito Coast with added fantasy fun.

The piece becomes a kind of ‘soft’ reboot. Re-cast Indiana: yes. Be bold, go younger (but not TOO young). New Indiana should echo the spirit of Ford without simply being a poor man’s impression /substitute or having predecessor and successor tread on each other’s toes.

Chris Pratt seems a solid choice; though a tad obvious and easy. Bradley Cooper and Tom Hardy should be in with a shout (can do action; comfortable in period costume and convincing as an academic).

Who can unite those pieces correctly? One Director.

SPIELBERG MUST DIRECT THIS!

Slippery Snakes and Nasty Nazis; Dangerous Death Cults and Distressing Damsels. Action! Adventure! Archaeology! All for nothing without Spielberg. He defined the aesthetic atmosphere of Indiana Jones. Think shards of light; hints of horror; carefully timed sounds/music. See the delight in period detail and a wartime reality amidst the action heroics. All Spielberg.

Be it reboot or last hurrah, Spielberg MUST return. He won Oscars for ‘serious’ films. But Raiders of the Lost Ark was a best picture nominee, too. Art and entertainment are not mutually exclusive. Spielberg’s heart wasn’t invested adequately for Indiana’s most recent screen adventure. He as good as admitted it. The fifth film is a chance to make up for that; same way the light-hearted Last Crusade effectively apologised for darkness in Temple of Doom (though both films have equal merit, despite disparate tone). He just needs to recapture that Raiders spirit. Nobody else can.

We look forward to hearing /sharing more news on this project soon.