This week was supposed to be GoldFinger /Tomorrow Never Dies. In view of the sad news of Sir Christopher Lee’s death, we decided to move those back a week and focus on a more obvious choice. We look today at The Man with the Golden Gun.

The Man with the Golden Gun James Bond (Roger Moore) receives an unwelcome parcel at Mi6. It is a golden bullet with 007 carved into it. It can only mean one thing: Bond is now a target of Francisco Scaramanga (Christopher Lee), aka ‘The Man with the Golden Gun’. Placed on suspension from active duty for his own protection, Bond goes undercover to locate Scaramanga. It transpires that there is a far bigger picture at work, with higher stakes than a simple duel between the world’s greatest assassins.

This is an interesting one in the Bond canon. It’s Harry Saltzman’s last film as joint Producer (Albert R. ‘Cubby’ Broccoli would take sole Producer duties afterwards). And the film is not regarded as a great success by any means.

Commercially it failed to hit as big as expected and it lacks the iconography and excitement that defined its immediate predecessor (Live and Let Die) and successor (The Spy Who Loved Me). But it’s by no means a failure and it is still an interesting production. Remember the message in all these reviews: there is no such thing as a ‘bad’ Bond film!

Let’s start with the bad. WHY did this film not win a beloved following, even in retrospect? One of the reasons is Bond himself. The characterisation is off and it pervades the film’s tone. Live and Let Die showed his ruthless side, but balanced by buoyant boyishness. Whilst Roger Moore was older than his predecessor, Sean Connery, he brought a youthful enthusiasm to his debut and this second effort somehow loses that sheen. It’s a terrible shame.

It’s as though Moore is playing a Connery style Bond but in a Moore body: an idea that lacks any logical cohesion, it’s like playing a tune in the wrong pitch. Granted, the plot implies Bond has his neck up against the wall and fears he is a target for the world’s greatest hit-man. But the atmospherics fail to maintain that sense of urgency and fear; so Bond’s methods come across as simply rather nasty.  The scene where he basically assaults Maud Adams’ Andrea Anders is a low point in the series (thankfully, Roger and Maud have a second attempt at Bond /Bond girl in 1983’s superior effort, Octopussy). He’s also plain petulant in his dealings with Britt Ekland’s Mary Goodnight; needlessly so.

And since we all know that Sir Roger Moore is a true gentleman in real life, he was probably rather uncomfortable playing Bond this way and his discomfort translated to his onscreen presence. Perhaps his heart simply wasn’t in it? We know that he regrets the scene where bond pushes a child off a boat, as Sir Roger is now a UNICEF ambassador and has worked tirelessly for the cause of child protection, worldwide.

But it could just be a matter of fatigue. Every series benefits from a break, just as they burn out through overload. It has been just one year since Live and Let Die, as opposed to the customary minimum of two year waits between the Bond pictures. Roger and co perhaps just needed a bigger break? Consider The Spy Who Loved Me: it’s made three years after ‘Golden Gun and the benefits speak for themselves (a happier, healthier, funnier, charming Roger Moore 007 at his peak). And Bond history would repeat itself. GoldenEye re-launches the franchise after the 6 year break following Licence to Kill; Skyfall is the biggest Bond ever ($1billion in box office!) after a 4 year wait. And so on. The pattern will no doubt repeat itself. Again.

There are other things that don’t work in the film. Why is Sheriff J.W. Pepper (Clifton James) on holiday in the same place that James Bond happens to be on assignment? It’s a stretch too far and a needless extension of a character that had already outstayed his welcome in Live and Let Die. It adds nothing to the film and just takes one out of it: a meta nod too far that really isn’t that funny. One could also argue that it’s a racist caricature, but then so was Deliverance if that’s the case so we’ll let that one go.

The tone and pace are a little uneven. What begins as a promising pulp thriller with Bond genuinely scared of the unknown, rapidly devolves into the usual mad man on private island with Macguffin up for grabs scenario. That would be acceptable if there were the kind of visual escalation one expects from 007.

Each mission usually begins with a small matter and simply gets bigger in stakes but there is a sumptuous quality to that system. Things feel a little low quality here and low budget, even. Scaramanga’s island lacks a private army (yes I know he’s a great assassin but if you’re going to be a Bond villain..).

So what DOES this film have to recommend it? There is an historic car stunt (and no, it’s NOT ruined by the comedy sound effect at the end of it). Frankly, it defies the laws of physics and this was in the days before CGI. It’s a true marvel of film-making and typical of the supreme standard of craftsmanship on every Bond film.

THAT theme tune is catchy and it blasts through the film in an upbeat fashion. There are some decent one liners (‘so’s my aunt’; ‘Jealous Husbands! Humiliated tailors! Outraged chefs!’). The Macguffin is clever and creative and remains as relevant today as it ever was. The race for clean and efficient energy might not sound as exciting as the stolen nukes set-up of other Bond villainy, but its power and relevance are felt in this film.

The martial arts scenes marry genuine threat to physical comedy and there is a great piece of production design on the Mi6 Boat HQ and Scaramanga’s House of Fun. Herve Villechaize’s Nick Nack is a hilarious henchman. And the genius nature of the Golden Gun device and its deadly reveal are classic Bond movie moments.

But the main selling point here is the late, great Sir Christopher Lee. That’s why I saved him for the end. His presence is bigger than the film itself.  Lee’s Scaramanga is one of the best Bond villains of all time. He took the homo-erotic, fetishist gangster from Fleming’s novel and crafted a new, more polished product.

Sir Christopher’s baddie gave us a glimpse of the dark side to 007; with all the wit, style and class intact yet unfettered by the code of ethics or national pride. He moves with a kind of elegant grace, whilst maintaining an unmatchable menace throughout. He’d have been a great James Bond himself. Much missed by everyone: Christopher Lee is the kind of star they simply don’t make anymore. RIP. Not a golden entry in the series history; but undeserving of a golden bullet. The film has more to recommend it than it’s frequently given credit for. Above all, The Man with the Golden Gun is worth watching because it was blessed by the presence of Christopher Lee. 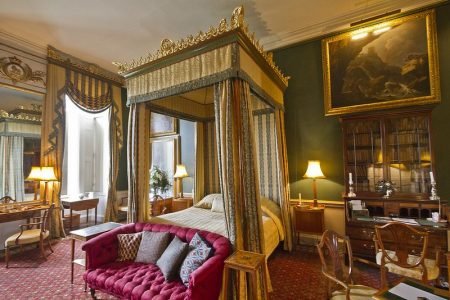