There’s a new television version of MINORITY REPORT headed our way. TOM CRUISE is a prominent presence in media at the moment as we build towards MISSION:IMPOSSIBLE ROGUE NATION. And we have regular debates nowadays on the ethical limits of surveillance: to what extent is it ‘ok’ to take draconian measures in a bid to prevent evils such as terrorism? So now is an opportune moment to look back at the 2002 movie, MINORITY REPORT.

Think classic Spielberg: managing to fuse his two main styles. On the one hand, we get a rip roaring action adventure science fiction picture in the Raiders of the Lost Ark and Jurassic Park traditions. On the other, this is a dark and broody, provocative piece. It’s not real / historical in the Schindler’s List /Amistad /Munich sense, yet nonetheless exudes a serious tone to convey satirical sensibilities.

Perhaps MINORITY REPORT is best viewed as the middle chapter in a whole sub-genre phase in Spielberg’s career from the early 2000s: watch with AI and War of the Worlds. Spielberg, via Stanley Kubrick and Tom Cruise.

So, for this week’s THROWBACK THURSDAY, NICK CLEMENT looks back at MINORITY REPORT.

MINORITY REPORT is the most underrated movie ever to have a 90% Rottentomatoes score with a $350 million worldwide box office haul. For some reason, not enough people give this movie credit and I’m not sure why.

It’s a visual marvel from top to bottom, the blending of the core sci-fi and detective elements were perfectly calibrated by screenwriters Scott Frank and Jon Coen. You got a terrific Tom “Movie Star” Cruise performance before he truly went off the Xenu deep-end. Supporting cast all outstanding.

Janusz Kaminski’s glassy-smeary-amazing cinematography looks beyond sharp and high-contrast in the luscious Blu-ray format. The score from John Williams was one of his most propulsive.

The vision of the future that this film painted felt tangible and realistic and it’s funny how some of the technology that the source material and film would go on to predict is eerily prescient.

Like the best neo-noir science fiction hybrids (Dark City comes to mind), MINORITY REPORT knows exactly when to riff on genre while simultaneously inventing its own set of rules and aesthetic guidelines that helped turn it into one of Steven Spielberg’s most thoughtful blockbusters. This is a film with as many ideas as breath-taking action scenes. The production design is truly extraordinary, and the mostly seamless visual effects compliment and heighten the narrative rather than overpower it with needless bombast.

The jet pack chase and fight with Cruise battling it out with the various agents and crashing through the apartment complex is pure BEARD POWER, with visual humor to punctuate the seriousness of the situation, while always exhibiting a childlike sense of wonder and mentality that anything is possible.

And even if the ending still needed some extra tweaking (I think another 20 minutes was warranted), this is one of those consistently smashing entertainments that pushed the boundaries of the PG-13 rating, telling an adult story that asked you to use your brain in order to figure out all of the exciting pieces. 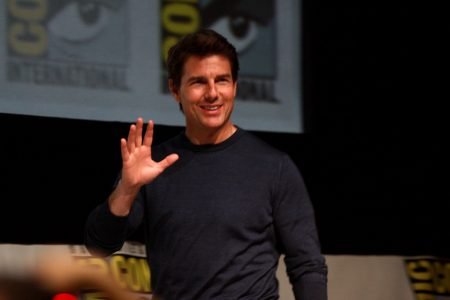