DAVID BOWIE (RIP): A LIFE AND LEGACY IN FILM The sad news of the death of DAVID BOWIE cannot have escaped you (unless of course you actually do live on Mars?). It was of course, inevitable. Like it or not, we all die. It is what binds us: that sense of eventual mortality. ‘Death, The Leveller’, as Shakespeare put it. Connection? There will never be another Shakespeare. And there will never be another David Bowie. He stage managed every aspect of his adventurous and wonderful life and death was no exception.

Bowie’s individuality, innovation and ingenuity ensured his timeless popularity and ageless excellence. Hence the outpouring of grief and admiration across the world and its web these past few days. Granted, there have been a few trolls, as always. When British Prime Minister, DAVID CAMERON expressed his tributes (it’s kind of in his job description: when a British cultural hero dies?) he was greeted with the ‘wish it was you’ brigade. And some of those who disagreed with Bowie’s political beliefs also vented venom. And yes..maybe it is all a big surprise that one man’s death is still dominating the social media airwaves? Except this was not just any man. This was DAVID BOWIE.

So on the whole: unified admiration, adulation, respect and shock and grief. A ‘viral’ sensation in the truest sense. It’s a powerful combination and points at a great musical legacy. Bowie himself forecast that the Internet would revolutionize communication and culture. He was right. Of course, his focus in that prediction was music and criticism /  debate surrounding the art-form.

But one should not forget that Bowie was a cinematic connoisseur and adventurer. His music videos were defined by striking imagery and characters, set pieces, colour schemes and vibrant edits. He was also a performance artist who ensured that every ‘gig’ possessed a kind of theatricality and dramatic production design motif.

That cinematic sensibility and penchant for hard work must be in the genes. It was Bowie’s son, DUNCAN JONES, that broke the sad news of his father’s death via Twitter. Duncan himself is an incredibly talented and hard working Director. MOON, SOURCE CODE and the forthcoming WARCRAFT: all Jones!

David Bowie could have made a great Director himself and indeed could have made more of his own acting career, but for his commitments elsewhere in music. He turned down some roles that would have made for interesting viewing. The JAMES BOND villain, MAX ZORIN in A VIEW TO A KILL (1985) was not only offered to but tailor made FOR Bowie.

It makes perfect sense, especially when one considers the almost other worldly nature of that character’s backstory and the fact that he’d be paired with GRACE JONES as Henchwoman. CHRISTOPHER WALKEN played the role and was excellent as always, but this remains one of cinema’s great ‘what ifs’ and would have added a very 1980s visual atmospheric to this much maligned but still compelling Bond film.

THE JOKER in BATMAN was another part that Bowie was considered for. I mean the 1989 Burton version of course rather than the Nolan /Snyder incarnations. But his presence is still ‘there’: Nicholson’s Joker is supported by JERRY HALL, who was muse to MICK JAGGER..who had a lifelong rivalry / friendship /collaboration with..DAVID BOWIE! And the colour schemes, riffs on the macabre and artwork motifs and timeless nods at Weimar architecture in that Burton /Schumacher Batman era are VERY Bowie-friendly.

Oh and he was almost CAPTAIN HOOK in STEVEN SPIELBERG’S (hit and miss but still good ish) HOOK (1992). He would have been BRILLIANT. DUSTIN HOFFMAN did an admirably good job in the role, though it’s another cinematic ‘what if’ / missed opportunity in the David Bowie casting canon alternate universe.

As to the roles that Bowie DID take? Well, a few of course stand out. Let’s have a quick look.

It’s a harrowing yet poignant and moving film about the treatment of prisoners of war and the culture clashes that occur in interpreting both a language and ethos of warfare. Widely and rightly regarded as one of Bowie’s best.

A striking and surreal yet also painfully satirical and pertinent piece on how money and earthly power can corrupt and deface an alien innocence, even when it falls in love with its human counterpart. Not an easy watch and quite confusing on first viewing.

And yet: this is proof of how experimental and effective cinema can be in the hands of a master Director (NICOLAS ROEG : a hero to / inspiration for DANNY BOYLE) and a willing artist / leading man in DAVID BOWIE. Note also: its emphasis on water as a resource: just as relevant today as on the film’s initial release. Bowie was BORN to play this role and it went some way to explaining his endless association in peoples’ minds with the ‘alien’ (aside from the space motifs in his music).

It’s a real shame that this film did not perform better at the Box Office on its original run. Indeed, it’s rumoured that its lack of success deterred Bowie a little from taking on more acting work. But it did gain a cult status and remains somehow part of the collective childhood memories among my generation. Even recently there was talk of a reunion /sequel film.

LABYRINTH FEELS part of that post original trilogy yet pre prequel STAR WARS era, alongside the likes of DARK CRYSTAL, NEVER-ENDING STORY, WILLOW and the like. It’s JIM HENSON at his best and also gave us an early indication of JENNIFER CONNELLY‘s star power. Above all: a charismatic and screen gobbling (goblin?) performance from DAVID BOWIE: fusing acting and music with aplomb. Magic.

Pontius Pilate is one of those characters that mythology initially invited us to treat with suspicion / derision. But as history  moved on so literature and film have begun to consider the impossible position that the Roman Governor was in. Yes, his indecision leads to the death of Jesus.

But Jesus himself is in his own story at least, making that happen, to some extent. Bowie captures brilliantly here the initial curiosity, and almost compassionate yet ultimately non committal character that probably defined the real Pilate. Controversial yet compelling film making from MARTIN SCORSESE.

One of Bowie’s last and best performances here: a kind of ‘greatest hits’ role, as NIKOLA TESLA. One of Director CHRISTOPHER NOLAN‘s strengths is casting and especially in selecting initially less obvious names to play roles that ultimately fit perfectly. In Bowie’s case, his Tesla is a creative innovator with scientific expertise that he fuses to performance art, via a hint of the other worldly. Sound familiar? Like I say..natural fit.

Ok I’m cheating a bit here. But DAVID BOWIE‘s music has been a character in itself in countless movies down the years. It lends instant atmosphere and a balance of joy and philosophical contemplation. THE BOAT THAT ROCKED very cleverly uses LET’S DANCE to close the movie, thereby capturing the sheer joy that music in its most popular and accessible form has brought to countless listeners.

DAVID BOWIE was one of the great leaders and innovators in that march of musical progress. And he played that role, in many senses with the aid of his very own cinematic sensibility.

Rest in Peace. The Legacy will live forever and so will the music and movies. 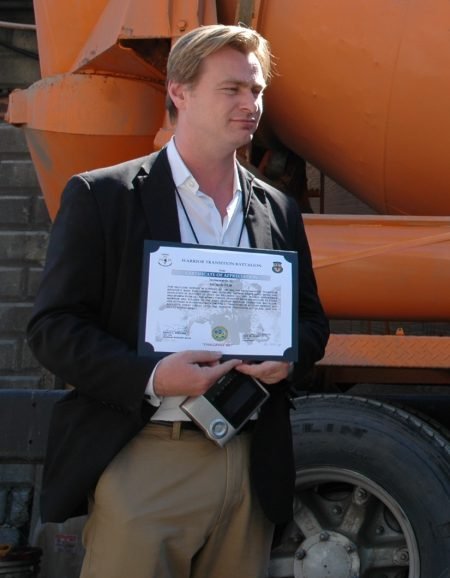