KINGSMAN 3: THE KINGSMAN (Previously known as ‘The Great Game’)

James Bond: Who is he? Jason Bourne: off brooding somewhere for another decade. Ethan Hunt: that’s just a fancy name for Tom Cruise!

But you always Bet on the KINGSMEN to step up for  spy Cinema..

It’s early-ish days. But there is a new KINGSMAN movie on its way. From Matthew Vaughn and MARV Productions /Fox/Disney. Released in 2020, schedules / ever changing release date slots considered. Here’s what we know, so far / can speculate upon. NB: Some done in jest so filed under ‘satire’ as much as ‘news’ (just in case ever present Trolls take us to task again). Here we go.. Set in the first world war era. So no Eggsy and co (Taron Egerton / Colin Firth will sit this one out but will get their own final sequel). New faces, new team, period feel. Naturally, there will be less of a high tech look/feel, too, though reverse engineering / deliberate anachronism cannot be ruled out? We will see world building; the foundation and origin of the Kingsman organisation. Why they set it up and how (a bunch of aristos, worried for the way the world was headed and mourning heavy losses of bright young minds..pooling resources..to save the world, in style?).

In place of Colin Firth? We get Ralph Fiennes. It’s a clever if predictable bit of casting; merging his profile as M from the Bond films with his wardrobe from his time as John Steed. Fair bet he’s on mentor duties as Ralph is done playing rent-a-Brit-baddie. Charles Dance also features so perhaps he is the mentor’s mentor or baddie’s baddie? Either way, expect lots of SLOW TALKING STILTED ENGLISH SPEAKING scenes, which Americans love and are sold as ‘gravitas’ or ‘great acting’.

These films are born from Bank Holiday family viewing nostalgia via adolescent fantasy. So it’s a fair bet that, given the heavy period setting / WW1 motif, we get some German characters and that they may well play for the villainous team. That said, ever conscious of the whole racism thing, it could all turn out to be some frightful misunderstanding, with the poor German sorts being played by some bigger picture evil (bit like in 2017’s Wonder Woman).

Alternatively, they simply forget that WW1 era Germany is NOT the same as ww2 era Nazism? And we therefore find ourselves battling ‘The Germans’? See: that mangled reference about ‘I fought the Germans’ at the start of 2001’s Pearl Harbor and indeed, again, 2017’s Wonder Woman: whereby Trench warfare might as well have been a second rather than first world war feature.

For a fun yet somehow still quasi serious and adventurous model of how to use WW1 in a funny action adventure picture, without confusing the Germans as ‘Nazis’..see, perhaps, Biggles: Adventures in Time (1986; an underrated if undistinguished, infectiously and harmlessly likeable gem).

Kingsman can learn from that Biggles template? But tread carefully, for we be in Brexit territory, now in the present day and PLEASE DO NOT see that as cue to overdo the parallel with today’s garbled diplomacy!

Expect bowler hats, tweeds, brollies, brogues..zzzz. Yes, we know they seem to think that Savile Row = style? It doesn’t. It’s just the name of a place where excellent tailors reside and work, traditionally. There is nothing distinctive or original about a hero decked in bespoke Savile Row gear as it does not really mean anything. It’s just a place name and as such, rather lazy to drop as the name of choice? If I am being pedantic there: good! The emphasis on suits, cuff-links, cocktails and the like was to my mind, just a 007 rip-off. It is not class so much as it is the idiom of the nouveau  riche dorm bully: rich yet newly so and snobbish rather than truly aristocratic or distinguished. That said, the brands can still shine and, much like the tech, can be reverse engineered and filmed with enough gloss and glamour to the point of fetish. Speaking of fetishes..

KINGSMAN: THE GOLDEN CIRCLE went a bit too far with its Glastonbury scene. I shan’t elaborate but those who saw..know. Taron himself registered concerns when filming. Critics hated it. I almost walked out of the Cinema on seeing it. And the first film indicated that a hero’s reward for saving the world was a sexual act which, by its nature, is not to be laughed at/about. Despite those missteps or, perhaps, because of those, however, one got a sense of moral reward in the films’ basic set of traditional values.

There was an emphasis on chivalry, teamwork and being the very best you can be, without ever forgetting who you are or where you came from. IF this new picture can honour that delicate balance then we have uncovered the ‘USP’ that will propel it towards further sequels / tv spin offs as mooted. It’s the idea of having the best of all possible worlds: a third way, on film, in a world that is sadly drifting towards a political polarity, offscreen, despite all lessons from history (including.yep..WW1!).

THE KINGSMAN will be reviewed here on its release. 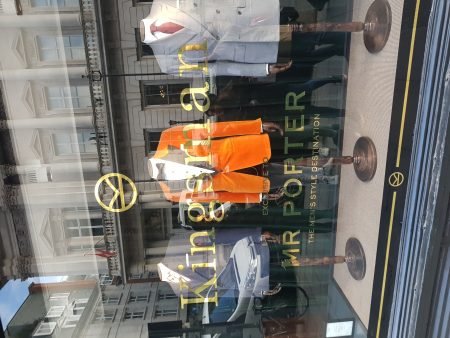