The most badass movie characters in casino movies of all time

Gambling isn’t just about luck. Often times casino games take skill, strategy, and finesse, three traits also embodied by many of the protagonists in your favorite casino movies. Not only do these characters have what it takes to win the most intense casino games, but their particular skillset puts them in a league beyond the typical gambler.

But what is it exactly that makes these characters so memorable?

While each casino movie is unique, their main characters share one thing in common – they’re badass. Maybe it’s the gambling that puts us on edge, or maybe it’s the drama, but in any case, the characters in these movies are undeniably captivating.

Gambling already gives a sense of thrill. Especially in games with higher stakes, gambling can be a test of will, cunningness, and ingenuity.

If you’re a gambler, you probably understand, but this thrill is even more heightened in these movies because rarely are the characters just playing to win some cash. There’s always something more at stake.

Gambling itself has been around for decades, and as people and societies evolved so have the games. But gambling’s influence far surpassed being a fun game with friends. Now it’s a common theme in many movie hits.

Casino movies have been around for decades. One of the first casino-themed films was Casino Royale, released in 1967. It was a spy film based on the first of Ian Fleming’s James Bond novels. Unlike today’s version of Casino Royale, the 1967 movie was a comedy – capturing the hearts of viewers through a hearty laugh and well-placed humor.

But most casino movies that followed didn’t have this similar hilarity. Instead, many combined fast-paced actions with the rush of gambling, such as in the 2006 Casino Royale.

However not all casino movies involved spies, missions, and mystery. Many other films captivated their audiences by playing on gambling itself. These kinds of casino movies usually had a character that had gambling skills unlike any other and followed this character’s risky journey to fame and fortune.

Movies like this include 21 (2008) and High Roller: The Stu Ungar Story (2003). These movies involve unbelievable gambling wins and usually also include a heart-wrenching drama that unfolds.

Despite the wide range of casino movies, their characters make all of them memorable. Their actions and their stories surprise us, shock us, and even sometimes make us cry. But more often than not, these characters leave us in awe.

So, here are some of the most badass characters in casino movies of all time.

James Bond is perhaps the most iconic casino movie character. But he’s not really known for his gambling skills or incredible wins. Rather, he’s known for being the best and most badass British spy.

The character of James Bond has a long history of being adored and admired by the public. First being featured in a book series by Ian Fleming, Bond went on to be featured in multiple blockbuster hits and a television show.

In the first James Bond film, Casino Royale (1967), Bond was portrayed by David Niven. But today, the most famous Bond actor is arguably Daniel Craig, who was a controversial choice at the time. After Craig’s first Bond role, his portrayal was critically acclaimed, and he went on to continue in multiple Bond movies afterward.

The character, James Bond, despite the generations of actors that rose to the challenge of his portrayal, remained an iconic role. Every once in awhile, you might even hear someone say his most famous line, “Bond… James Bond.”

Like the James Bond movies, Ocean’s Eleven has a long history of being a beloved casino adventure movie. Both the 1960 and the 2001 versions of the film feature a famous cast, making Danny’s character all the more intriguing.

In 1960, Ocean was played by the notable singer Frank Sinatra, while in 2001, the role was given to the award-winning George Clooney.

Danny Ocean is described as a smooth-talking con man. The film follows his journey through a $150 million heist. Though Ocean isn’t a hero like Bond, the movie will have you on the edge, as you wait to see if they can pull it off.

Ben Campbell is an intelligent MIT student who dreams of attending Harvard’s School of Medicine. But his troubled past prevents him from being able to pay the hefty $300,000 that medical school would require. So, Campbell joins a secret club headed by the math professor that teaches him and a few other students the art of card counting.

According to Gambling News Magazine, part of what makes Campbell such a badass character is both his determination and the development of his character as his dreams fall away to the lust of money. The thrill and risk of the students’ ventures, especially considering Campbell’s big dreams, make this film absolutely engrossing.

Falling victim to greed, you get to watch Campbell and the other students take the biggest risks of their lives and how their once innocent dreams take a turn for the worst.

The film itself is a must-watch, but what’s even more fascinating is that it’s based on a true story.

According to Mike Tan, from Online Casino Gems, people love the movie 21, because “many audience members relate to the story of Campbell’s struggles to find the means to afford the education he dreams of. This makes the movie all the more real and endearing. So, even if Campbell becomes consumed with greed, a part of us wants him to pull it off, even if another part of us wants him to stop.”

Another film based on a true story, High Roller: The Stu Ungar Story, follows the infamous Stu Ungar, known for his arrogance, competitiveness, and craze for the game.

Ungar isn’t known for being a hero, but he’s definitely well within the definition of badass. He is a legend among the Las Vegas gambling scene, but it’s not always a good thing if a player is compared to him. Though not highly thought of by his contemporaries, younger gamblers often romanticize his rebellious attitude and disregard for common decency.

Though Ungar was an amazing gambler, he was abrasive and downright scary. Ungar was known for vice and self-destructive tendencies. The Kid – The Cincinnati Kid (1965)

According to Gambler’s Daily Digest, The Cincinnati Kid is one of the most classic gambling films. It follows the story of Eric Stoner, or “the Kid,” an up-and-coming poker player.

Throughout the movie, you’ll find yourself rooting for the Kid, as he works his way up to becoming the best poker player. And when he challenges Lancey “The Man” Howard, the most respected poker player around, you’ll be on the edge of your seat.

So whether you’re looking to watch a hero or a criminal, or even a spy or a gambler, these five badass casino movie characters are sure to impress. These characters’ fame is most deserving, and each of their stories will give you a thrill. 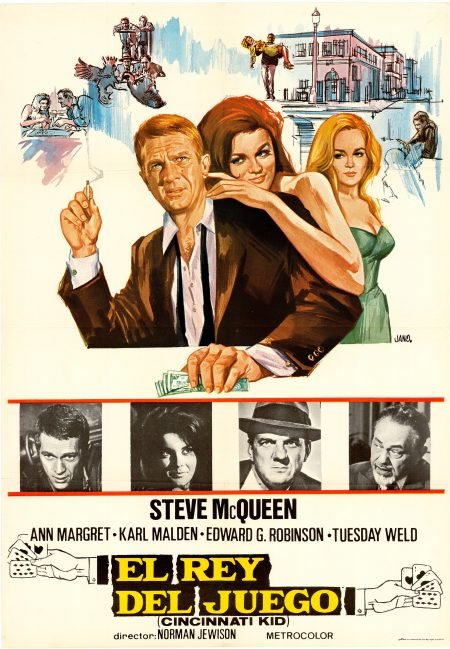