Through their Twitter account, the folks doing the marketing for District 9 revealed today that the official website is finally live. The film opens up in just two months,  and the viral has been going on for almost a year, so it seems rather late. But, as the saying goes, better late than never. You can check out the site for yourself, but I’ll do a quick walkthrough right now for those looking for some insight. (Click on all photos to see larger high-res versions)

When you first get to the site, you get a “Do Not Enter” entrance page. 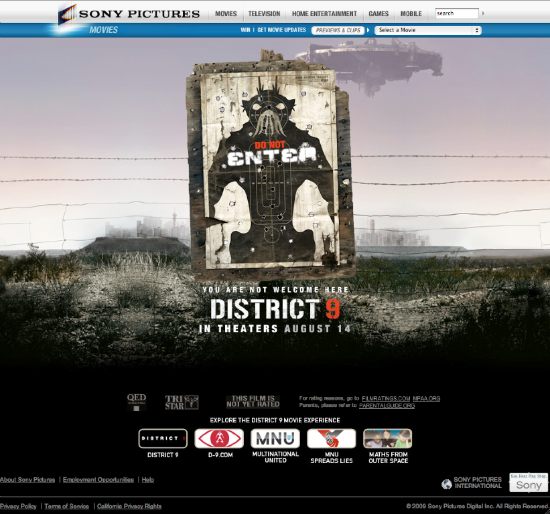 Once you click on “Enter” (when you move your mouse over it, the words “Do Not” disappear and “Enter” turns red), the next page has the trailer that most of you have already seen. Once you get past that, you get to the good stuff. There’s a highly edited and stylized 360 degree panoramic view of the District 9 area. Just move your mouse to pan up, down, left, or right. Notable sights are the alien spaceship hovering above the city, the alien target practice poster, the “Paving The Way To Unity” statue, and multiple MNU trucks and signs. Just from this image, you can tell how impoverished this area is. 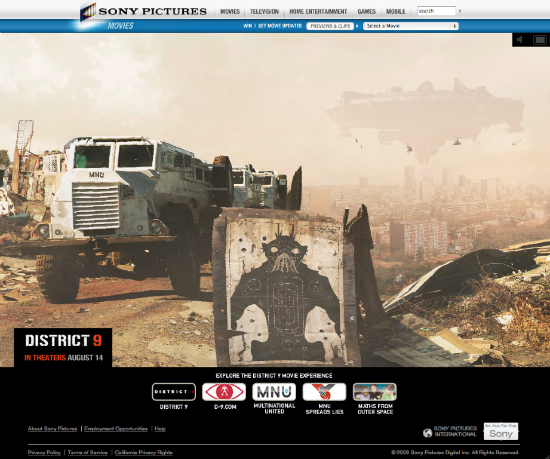 The audio on the site is a combination of Clinton Shorter’s score (which we hear part of in the trailer) and ambient sounds from the District 9 area, such as a helicopter, gun shots, tanks, etc. 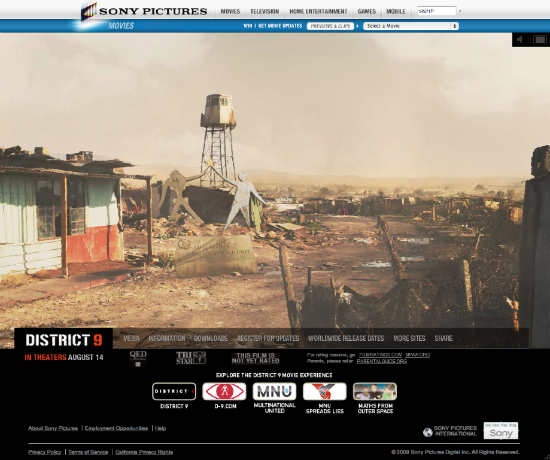 There are also links on the bottom of the page when you move the mouse pointer in that area. The Media section has a photo gallery section and a video section. The only video is the trailer, but there are some pics up (including the one below), so check it out. 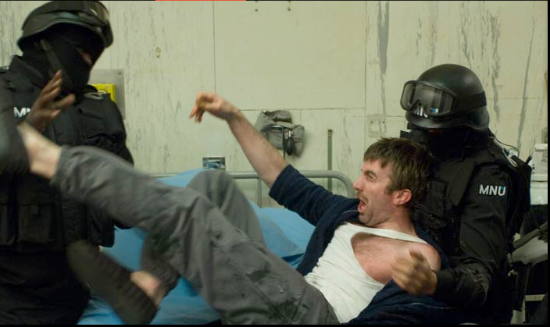 The Information section just has some basic cast and crew listing, but also has a juicy plot synopsis:

Thirty years ago, aliens made first contact with Earth.

Humans waited for the hostile attack, or the giant advances in technology. Neither came. Instead, the aliens were refugees, the last survivors of their home world. The creatures were set up in a makeshift home in South Africa’s District 9 as the world’s nations argued over what to do with them.

Now, patience over the alien situation has run out. Control over the aliens has been contracted out to Multi-National United (MNU), a private company uninterested in the aliens’ welfare – they will receive tremendous profits if they can make the aliens’ awesome weaponry work. So far, they have failed; activation of the weaponry requires alien DNA.

The tension between the aliens and the humans comes to a head when an MNU field operative, Wikus van der Merwe (Sharlto Copley), contracts a mysterious virus that begins changing his DNA. Wikus quickly becomes the most hunted man in the world, as well as the most valuable – he is the key to unlocking the secrets of alien technology. Ostracized and friendless, there is only one place left for him to hide:

The Downloads section has some cool wallpapers, Twitter skins, and screensaver. The other sections aren’t as interesting, although the More Sites section has a nice little graph showing all the viral sites. 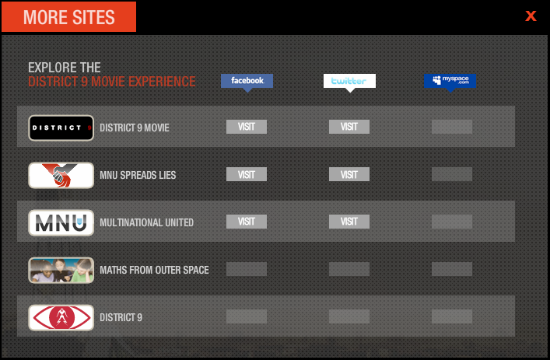 See anything else interesting on the official site? Let us know!