D-9.com has two new interview videos up with more of the local human population in District 9. Just click on the two yellow dots on the map to access the video. One begins with the title card “DO YOU HAVE A PROBLEM WITH THE WAY NON-HUMANS COMMUNICATE”. In it, three clips of three different human locals talk about the difficulties in communicating with the non humans. The second has the title card “DO YOU THINK THE NON-HUMANS ARE COMMITTING TOO MANY CRIMES”. Similar to the other video, three clips of interviews show people talking about how the non-humans commit crimes, including one confirming the non-humans do not have fingerprints. Interesting stuff.

There were two things I noticed specifically after watching these videos. One is, these (and other) interviews look incredibly authentic. Second, no one in the videos ever uses the term “non-human” or “aliens” or anything like that. It’s always “Them” and “They”. Not sure why that is, but I have a rather abstract theory that ties my two observations together. My theory is that these are genuine interviews, but they are about something else. The filmmakers actually interviewed locals in South Africa, but they weren’t talking about the movie, they were talking about real events. Why? To make the interviews authentic. Maybe locals wouldn’t talk about an alien movie, but real issues, sure. Who knows.

Our other District 9 update comes from Christopher the non-human at mnuspreadslies.com. When you go onto D-9.com as a human and type in “target” in the access code, you get a printable version of the non-human target seen on the film’s posters. Click on the image below to download the target in PDF format. 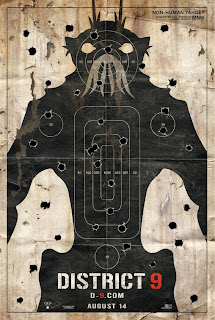 Remember to let us know if you find any District 9 viral updates. There’s a lot out there, so we need your help. The film opens August 14th.