There Are A Lot of Answers In District 9

A really great interview has been posted over at io9.com which asks some great questions to director Neill Blomkamp. And in return, some interesting answers. Take a look.


One actor plays all of the talking aliens.

Most, if not all, of the alien interaction and dialogue with Wikus during the eviction scene was improvised by Jason Cope or the actor Sharlto Copely (Wikus).

So we would film the two of them and then we would go to a different shack. And he’d pretend to evict a new alien. Then we’d go somewhere else and somewhere else. So it was just the two of them. It’s the conversations between those two, the actual dialogue and what actually came out of them was totally improved. Any details in words and the language between the two happened right there on the day of shooting. That what makes it feel like they are really communicating…

But stuff like when he walks up in to the shack and says, “this is a gang sign, we’re in a gang area right here,” we would draw the sign on the wall and he would randomly say it’s a gang area. And that meant because he’s walking up to a shack that has an alien in it with a whole story that we’ve written with those guys distilling their fluid and I’m like, “that’s interesting you just said that the supporting alien character is a gangster.” But if it works, we keep going.

The District 9 alien homes were actually shot in a recently evacuated area of impoverished housing. The homes you see the aliens getting evicted from were homes that humans had recently been kicked out of, for real.

There was a very weird cross over between the film and the reality of filming. We filmed in an area called Chiawelo, which is a suburb of Soweto, which is sort of a suburb of Johannesburg. And there is this thing in Africa called RDP housing, which are government-subsidised housing. Where they will build you a brick house in a different area of the city. And you get put put on a waiting list if you’re a South African impoverished resident, until you are able to get one of these houses. So the area we filmed the movie in, what plays as District 9, every single resident in that area was being removed to be put into RDP housing. Although not all of them had been given the green light on the RDP housing, most of them had, but all of them were going to be moved, whether they liked it or not. So we ended up with this open piece of land with all these shacks on it…each day we came to set, there were fewer and fewer people.

As you may know, District 9 was inspired by Neill Blomkamp’s short film Alive In Joburg. But what many people don’t realize is that he created Alive In Joburg’s footage of people being interviewed about aliens, by using real interviews.

I was asking black South Africans about black Nigerians and Zimbabweans. That’s actually where the idea came from was there are aliens living in South Africa, I asked “What do you feel about Zimbabwean Africans living here?” And those answers — they weren’t actors, those are real answers…

The “Prawn” are from the Andromeda Galaxy.

I think that they [the Prawn] do have a home planet, it’s pretty far away probably in the Andromeda Galaxy, but what I like is that they’ll live on the ship for thousands of years. Obviously, there’s much more of a population on the main planet, but the ships will go out and get the minerals and the ore and whatever resources they need and then bring them all back home.

I find this incredible that a director can go that direction to get the needed response for a short. Even bringing it ahead into D-9 with the homes that were used.

Now I would assume that when he says Jason Cope plays all of the aliens, he means that Wikus and whomever had to use him as their reference point when filming their dialogue. We’ve already seen an interview where he says the aliens are CGI.

So, based on the movie, does this make you thing any different about the movie? How are your feelings towards Alive in Joburg now? I can tell you we’ve already started talking about it (here). Tell us what YOU think. 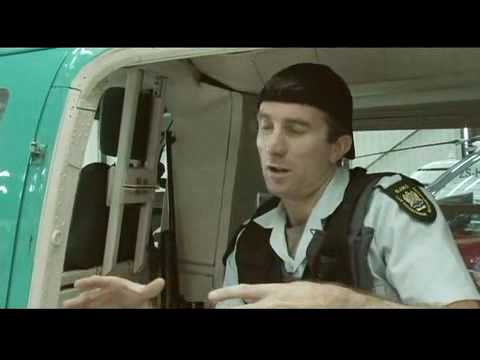 Who’s that little fella in Joburg?

District 9 is in theaters now. Check out our District 9 page for more information on the viral campaign and the film itself.