As a huge Star Wars fan, I was thrilled to see an interview pop on Wired.com where writer John Scott Lewinski interviewed a member of the Star Wars: The Clone Wars universe. Not series director Dave Filoni or a member of the voice cast mind you, but one of the characters themselves…bounty hunter Cad Bane!

For fans of the animated series, you will remember Bane from the season finale, where he orchestrated an elaborate hostage situation in the Senate Building on Coruscant. The episode established him as total badass, and I’m stoked for his return in season two. The interview itself is fairly short, but Bane does share his thoughts on his line of work, the death of Jango Fett, and his approach to dealing with Jedi.

While this certainly isn’t the most comprehensive viral, I love this approach by Lucasfilm to market the upcoming season of The Clone Wars. To me, there’s no richer franchise for a viral than Star Wars, and although I don’t see them putting forth the effort into a full blown viral ARG anytime soon, I will take these web treats when I get them. The Clone Wars resumes October 2nd on Cartoon Network.
Star Wars: The Clone Wars 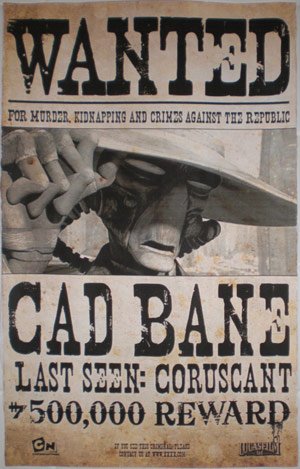