It’s the story of two brothers that feel the need to do what no one else will. Clean the streets of Boston and rid it of the trash. They do so in such a detailed way that all steps are planned out and carefully visualized. Of course, they don’t actually work out the exact way that they saw, but the job is done. And noticed.

What does this date have to do with the movie? Well, for some odd reason, this is when I saw the first film. I know, I’ve heard it all before. It took me a long time. I heard of it, and I planned on watching it. I just never did. But after viewing it, I had to go back and rearrange my entire list of top films. Without hesitation, this one went right in.

The very limited release of The Boondock Saints II: All Saints Day in theaters

Due to it’s limited release, I have to travel a bit to see it. Three hours to be exact. So my brother and I hit the road in order to see the MacManus brothers kick some ass.

The biggest thing that made this sequel a must for me were the names attached to it. A lot of sequels that take multiple years to make, end up by the wayside, and are usually bought out by someone who “liked” the film, yet has a completely different vision of the film, and they butcher it. Not this one.

Look up the cast and the crew from 1999, and you will see the same names in the current. That, to me, tells you that what you’ve witnessed in that first movie, will hopefully be brought out in the new.

In what a sequel SHOULD be, Troy Duffy finishes right where he left off. There are no new starting twists. There are no unfamiliar faces. There’s just and answer to the question, “Where are the Saints?”. Within the first handful of minutes you get a feeling of the excitement from the prior film.

It’s filled with action, music, storyline, and a ton of laughs. The camera is mixed with beautiful slow-motion, and followed by some to the point speed. The storyline itself changes for the better as the movie progresses. Simple things like the clarity of the film let you know that corners were not cut and it was all his film. This was made for those who enjoyed his work in the first. This was made because he enjoyed what he did.

It gives us a bit of a nostalgic feel and made us remember what led up to this time frame. Subtle reminders of what we saw in the past were made present in the film we see now. So much in fact that the crowd had shown it’s appreciation with laughing and clapping at the scenes that you would only get 10 years ago. 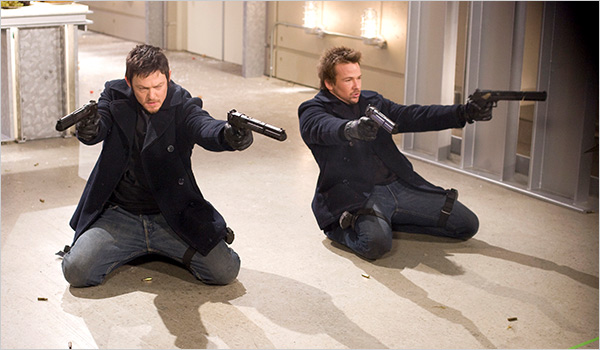 I can honestly say that the only issue I had with the film was some “overacting”. It jumps from time to time, but when it’s there, it’s there. The accents from the mafia, the yelling, to the intro of Special Agent Eunice Bloom (Julie Benz). It was there, but then it starts to fade away. Almost to the point to where it blends in like a tribute to Ron Jeremy in the first. I mean, come on. Ron Jeremy as a mobster? And for the record, the more and more I saw and heard Julie Benz, the more I fell in love with her.

All Saints Day is the perfect sequel. The cast work so well together that you can actually see it. And, if you’ve seen the first film, then there are no excuses to to miss this one.

The Boondock Saints II: All Saints Day – 4 out of 5