With Star Trek finally being released on November 17th (16th for me in the UK), details have emerged from Slashfilm regarding the finalized special features and also some special edition box sets. There are several special editions exclusive to retailers being released, including an AWESOME Enterprise model complete with the discs stored in the saucer section of the NCC-1701 replica. As usual, these special editions are limited, so if any of them appeal to your inner-trekkie you’ll need to move fast!

Hollywood Video is offering you the chance to win an autographed picture of Uhura, played by Zoe Saldana, if you rent or buy the film from them. Meanwhile, Transworld and Future Shop are launching a special steelbook packaged version of the movie, as is play.com in the UK. 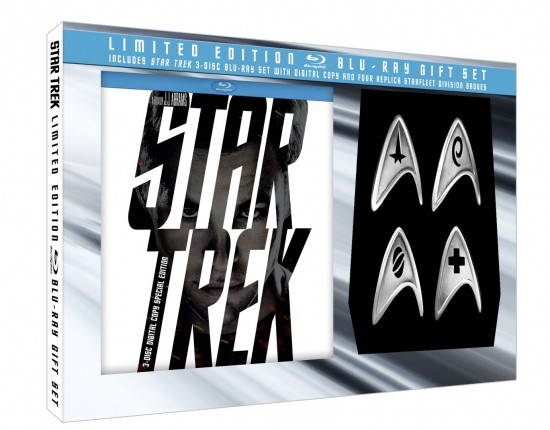 Wal-mart in Canada are also offering a special Lenticular sleeve for the 2 disc DVD edition. The packs that appeal more however are Best Buy, Target and Amazon’s offerings.

If you buy your set from Best Buy, you will be awarded with 4 pins replicas of the various Starfleet division badges. Also available in HMV for UK readers. 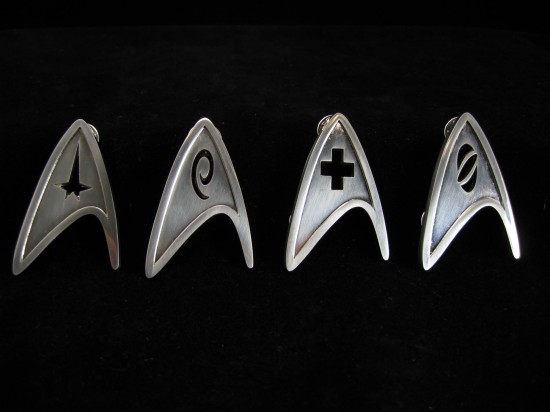 Target is offering limited edition DVD packaging in the shape of the Enterprise which comes on a plinth for display in your room. If you live in Canada, Best Buy is selling the same package 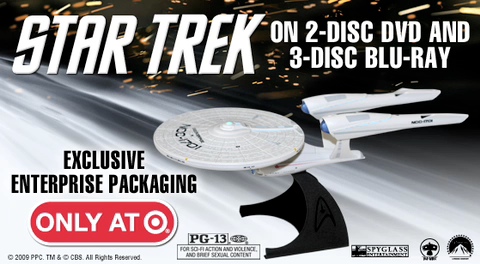 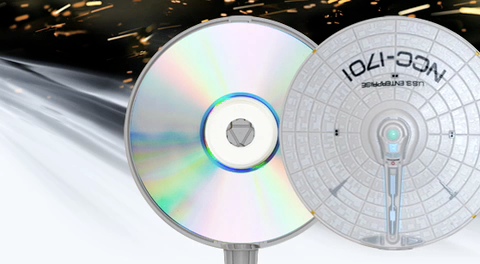 Best of all though is Amazon

‘s offering of a quite frankly AMAZING looking model of the Enterprise with the Blu-ray discs. 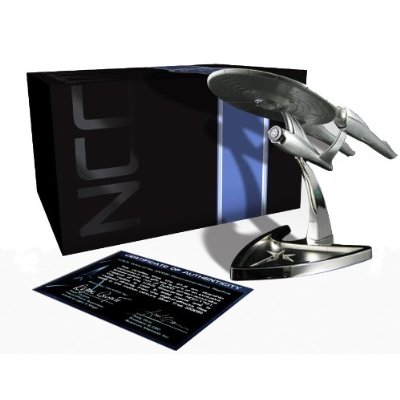 Special features confirmed on the Blu-Ray and DVD:

Commentary by the director JJ Abrams as well as the writers, producer and executive producer.

A new vision: A look at the produtcion of the film and the techniques employed by the makers to get the look of the film right.

Plenty of documentaries on the casting, alien design, score, “the sounds of Star Trek, planets, props and costumes and “To Boldly Go”,  A documentary on the challenges faced by the production crew to bring this movie to the screen.

Starships: A look at the new Starfleet, Vulcan and Romulan vessels seen in the film.

Gene Roddenberry’s vision: A look at the vision created by Roddenberry of a futureistic world and united federation on earth.

Starfleet Vessel Simulator: Explore extensive data on the U.S.S. Enterprise and the Romulan ship, the Narada. Submerse yourself in breathtaking 360° views and close-ups and review detailed tech information.

Also, and rather confusingly, the UK will also see the release of the first ten Star Trek films on Blu-ray in a smart looking box-set. No signs of a U.S. release as yet, but keep your eyes peeled!

So, anyone care to comment on which version they will be buying? My money would be on the Amazon version as it looks great, but let us know what you’ll be getting.