My iPhone Has Gone “Crazy”!

With all of the viral that has been popping up lately, including websites and Twitter accounts, it’s only fitting that they move onto an untapped market of iPhone apps! Thanks to ShockTillYouDrop, we now know of said app.

In addition to the “zombify”, “na’vi”, and “trek” yourself sites we’ve seen, this one brings it a bit closer to home. Whether you want to browse through your photos, or take a new one, you can now “infect” the ones you love. Just like you did on prom night! Oh wait, wrong kind of infection.

Here’s a viral, on a viral, within a viral: 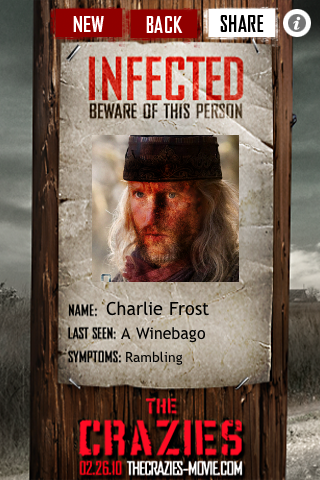 Granted it’s not much more that just a rash, but it’s something.

In other news about The Crazies, the other day we mentioned a new Twitter account. Well, based on a few comments, we were flooded with many more accounts. It’s hard to tell which one’s may be real, but based on a followfriday from SaveOgdenMarsh today, it’s probably safe to say that most are legit. Including a couple NOT mentioned.

Based on who those above tweeted too, we can probably add the following:

The cool thing about the majority of these is, they are feeling ill, or know someone else who is. Very similar to the Cloverfield/Myspace accounts where they all may start to tie in.

Thanks to River for the post on the last article.