ABC’s Lost is one of the most talked-about television shows in history. Speculations run wild about everything from how Richard Alpert does not age to why all this is happening in the first place. In fact, the questions are what make the show so popular and bring people back for more. No matter how frustrated you are with the maze of confusion, you have to keep watching in hopes of figuring it all out. Even the latest promos for the show’s six and final season are using to their advantage.

With fan sites and videos popping up everywhere in hopes of being the first to figure out all the secrets of “Lost”, we now have an actual DVD documentary that looks to unravel the mystery. Hollywood producer Dean Shull is a big Lost fan and created “LOST: UNRAVELING THE MYSTERY”. Here’s GeekWeek‘s description of the doc:

LOST: UNRAVELING THE MYSTERY is a documentary of that journey that took Dean Shull from the labs of scientists, to the show’s actual locations in Hawaii, and to the halls of Comic-Con. It’s a fan-inspired look at the average-joes who have done a tremendous (almost unhealthy) amount of thinking about LOST. You have the wannabe rock star with his bizarre theories, the party girl who can’t stop talking about shirtless Sawyer, and the scientist who offers a demonstration of energy build-up and discharge using a Van de Graff generator, giving a primer on the science behind the Swan station’s button.

And because I know you’re dying to see it, here’s the trailer for the documentary:

Check out the film’s cleverly titled website for more information on the DVD and a game of clues that’s part of the DVD (produced by Richard Halpen). Shull and Halpen are also hosting a contest where you guess how the show will actually end. The top 10 winners will receive a small 10” by 10” plot of the actual island where LOST is produced, placed in a LOST themed ornate pot. Pretty cool in my opinion. What do you think? 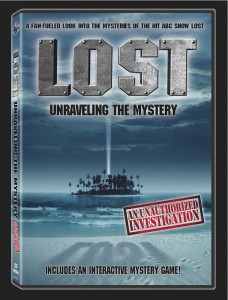