The Crazies: New Site and Login for DP Found

The updates for The Crazies keep coming at a rapid pass the film nears it’s release next month. We’ve reported on the DP Chemicals’ homepage, and the fact that there’s a login option that we had yet to access (aside from our little homepage“>hack. Luckily, the guys over at Bloody Disgusting figured it out. The login is “jbmartin” and the password is “p@ssword”. This gives you access to the email account of Jessica Martin, who is as we have talked about before, Director of Communications at DP Chemicals.

You can read all the messages in Jessica’s inbox, but I haven’t seen anything that answers too much. Many of the messages don’t seem to be important, but there is one that confirms the Twitter accounts of Jenny Wild and Tony Middlebrook. Check out our Crazies Twitter List to see all the confirmed Twitter accounts for this viral. The only other interesting things I saw were vague mentions of the “Scarlett Omega program” and Major Glasgow’s assistant asking Jessica to keep January 14th open.

Now to what I think is the more interesting update. A site popped up yesterday called The Truth About Trixie, and it has conspiracy written all over it (think Tidowave vs. Tagruato). The website is loaded with information and references; probably more than I even noticed. The site has a bunch of videos by a guy simply called “E”, and he talks about the disease “Trixie” that is basically super rabies (similar to Quarantine). While the origins and purpose of the disease are unknown, there are signs of it in history, and one of the symptoms is bleeding black blood. E makes reference to Ogden Marsh directly, because of all the weird things that have happened in town lately, and even talks about Jenny‘s situation with her dog that apparently had the disease. 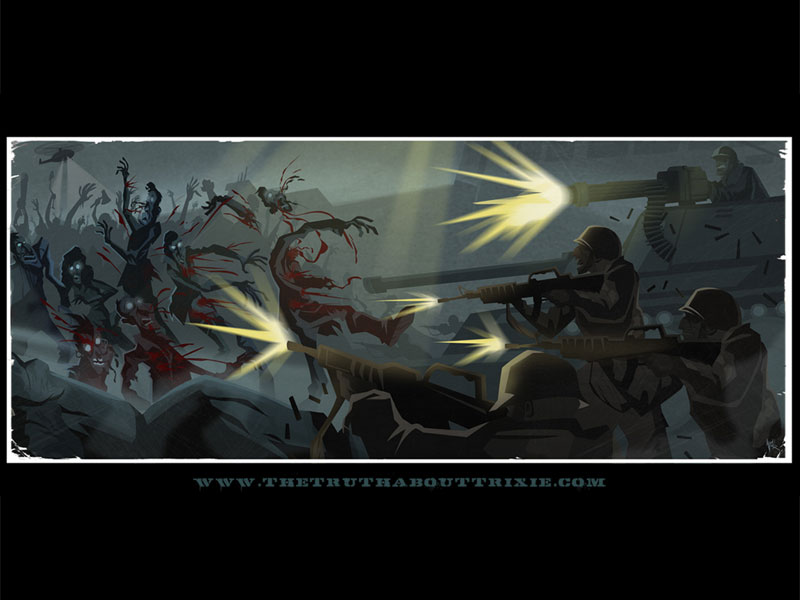 The conspiracy part comes into play where E finds connections between the disease, the military, and DP Chemical. He even gives a scenario where Trixie could be used biological warfare. Drop it in a town and watch everyone kill each other. In the “sightings” section you can even download some images, including some really disturbing ones of victims of the disease, as well as wallpapers like the one above.

Obviously Trixie is what causes “the good people of Ogden Marsh” to go crazy, but did DP Chemicals create Trixie, and if so, was it on purpose and why? I’m sure there’s something I missed in all of this, but now you have the access to figure it out for yourself. Leave a message in the comments below if you find anything, and also talk about what you think this all means.

The Crazies, based on the 1973 George A. Romero movie, opens Febuary 26th. For more information on the film and its viral campaign check out our The Crazies viral page.