Many of you may not have heard about the 2009 horror film The House of The Devil, and for good reason. The film didn’t have a nation wide release, its Writer/Director Ti West and actors are no-names (though you may recognize a few actors from small roles in the past), and it was produced and is distributed by independent companies.

So, why is the flick worth writing about? Well, first of all, it looks pretty cool. The film is set in the 80s and is specifically made to look like it was made then as well, even going as far as to have the distributor send out VHS tapes of the film to some bloggers. Also, there is some nifty viral marketing involved that should give you the willies. More info (and the trailer) after the jump.

The film is about a college girl who desperately needs money, so she answers a posted ad for a babysitter position. Of course, once she gets to the house, she finds out the older couple doesn’t have any children, but they want her to stay. She does (for the money), and hilarity ensues. I’m sorry, did I say hilarity? I meant complete and utter terror. Check out the trailer below to get a feel for the film.

So, what’s this viral marketing I’m talking about? If you looked closely in that trailer, you may have noticed the actual ad that was posted for the babysitter spot. Apparently, Dark Sky (one of the distributors) has been putting up the flyer in major cities to promote the film’s February 2nd DVD release. The photo below is the only one anyone has seen, and since it’s obviously a photo of a photo within a newspaper, there is some question as to whether the ad has actually been posted anywhere. What’s awesome is that the phone number works, and when you call the number listed, you get a creepy message. Call if you dare. 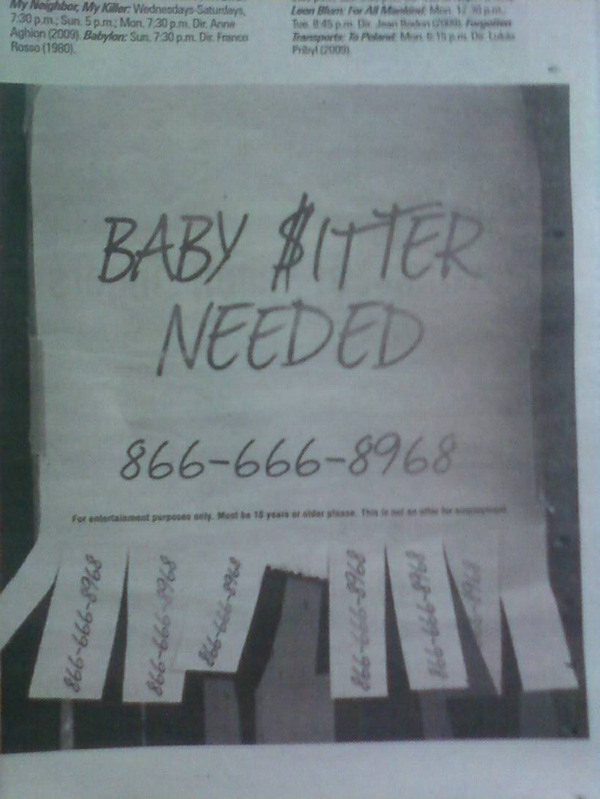 The House of The Devil releases on DVD

The House of the Devil