In September 2009, /Film ran the teaser trailer for director Scott Sanders’ Black Dynamite, a comedy based on the blaxploitation films of the 1970s. Directed by Scott Sanders and written by Michael Jai White, the film focuses around the main character of Black Dynamite, played by Michael Jai White (The Dark Knight). The story goes that in the light of his little brother Jimmy’s sudden and gang/drug related death, Black Dynamite comes out of his retirement to find out who killed his brother. As the story progresses we eventually find out that the local gangs are pumping cocaine into the local orphanages and an unknown source is making a malt liquor drink that has a drastic effect on the African-American male’s human body. Will Black Dynamite save his fellow brothers in time? Will he find out who shot Jimmy?

Black Dynamite is in every way a comedy, providing nothing but a good time and a great laugh for anyone who watches it. The film centers on the 1970s as its means of parody; a brilliant idea by Sanders and White because the actors chosen made their roles work so well, even just as a knock-off joke of the characters they’re meant to be. The entire “foxy mama” attitude of the females and the 1970’s “pimp” were parodied so well because every role was either an overly-independent black woman with a huge afro, or a hard-headed black pimp with the full-on pimp suit and ridiculously funny “street names”. Other great stereotypes included the white and Asian people, with the white man being portrayed as the 70s “government” corrupt and just an all around silly, awkward human being. The Asians being a completely Kung-Fu based culture, wearing all black and always talking in a perfectly parodied Asian-American broken English dialogue. The actors got into their roles so well, making every character literally believable, especially Chocolate Giddy-Up played by Cedric Yarbrough (Comedy Central’s Reno 911!). 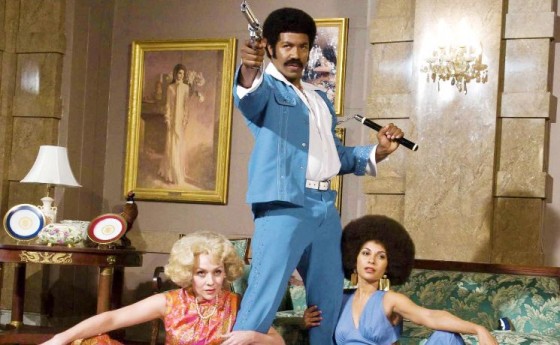 This is a movie that I literally cannot find a fault in, mostly because it’s my kind of humor, and every single joke was just brilliantly delivered by White and the rest of the cast. There are many, many jokes in Black Dynamite, and none of them ever get old showing the perfect mix of pacing and story – something you really don’t see too much anymore in a comedy anymore. The only other movie I got a laugh like this from was Mel Brook’s

Overall Viral Campaign Review: Black Dynamite‘s viral campaign is an extremely small viral, with one website and a YouTube Channel, but like everything about the movie, it worked so well. It provided me with a good “I can’t believe they went out of their way to do this” mindset when I watched the videos. This isn’t the best viral out there; I still loved District 9‘s the most for its deep and powerful back story. Where-as 2012’s is great for for its overall amount they allowed us to interact with a fictional, doomed world. However this kind of viral is the best for a small film like this though with Black Dynamite being actually a small independent Sundance film.

I have two ratings: