Avatar’s Influence Continues: Did China Rename A Mountain For Avatar?

There seems to be no end to what Avatar can do. We already know that movies will have less limits thanks to the new technology that was invented for Avatar, the highest grossing original movie ( More and more films are already coming out in 3-D). But, now a whole country has fallen for the epic blockbuster. A mountain in China, formally known as “The Southern Sky Column” in Zhangjiajie, is now named “Avatar Hallelujah Mountain” because photographs of the mountain influenced Avatar and its beautiful imagery.

But China didn’t stop there either.

Tourists traveling and seeing these mountains for themselves? The new phrase “Pandora is far but Zhangjiajie is near” is adopted by it’s government? Avatar is the most popular film in China, raking in $80 million from the box office, but we have to slow down for a second and take a deep breath. Did this movie just break a new level of success and is now a landmark in history? If this is true, then make no mistake; Avatar is becoming, if it isn’t already, legendary.

Too bad it’s NOT true. Unbelievably, sometimes BBC can’t get their facts straight.

“We just put a poster of two pictures comparing ‘South Sky Pillar’ with ‘Hallelujah Mountain’ on the mountain to show people evidence that the Avatar mountain originated here. It is a source of pride to Zhangjiajie,” Xinhua quoted Ding Yunyong, head of the city’s tourism department, as saying.

It’s nothing more than a nickname.  The mountain did inspire some of the beautiful imagery of Avatar, but we’re not getting tours by it’s name. Still, it is the highest grossing movie in China, and it did give a mountain a nickname. It’s still pretty big, but not as big as it was first claimed to be. Sorry, Avatar fans. 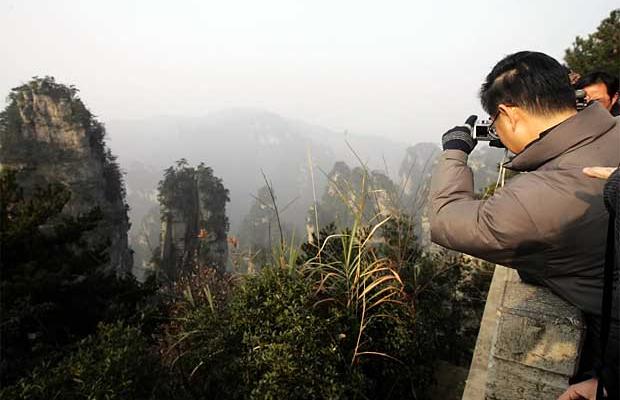 James Cameron was probably looking at the photographs upside down.

If it was all true and Avatar did get a mountain, I would have said this: Avatar proves that the films have no limits as to what they’re capable of. Movies can do anything, and if anyone doubts that claim then tell them about Avatar. It’s not profit or reviews that define the quality of the movie, it’s the effect it has to the real world, and Avatar is a prime example.

But, with the recent denial, could we say the same thing? Maybe, just not so strongly. It’s not the profit, it’s the influence to reality that defines a movie, just look at Star Wars. It may not have gotten a mountain but it did change the way we will see movies and managed to break multiple box office records. Avatar is well on a fan-driven path to making half-naked crowds of tall blue cat smurfs (you can re-phrase that to “crowds of Na’Vi” if it’s inappropriate) at conventions, but that will take time.

Do you think Avatar is capable of feats within that caliber? Would you want to see a mountain named after Avatar? You can share your opinion in the comments.
Avatar