Try saying that 3 times fast. While you’re at it, you might want to start following a few people on Twitter if you want to get more news on the latest Thor movie by Marvel Studios. MarvelFreshman, a user from comicbookmovie.com, has already done some of the work. He’s collected a select few of tweets and replies that give hints to how the Thor movie will look like, as well as its current progress in production. Suffice to say, it’s not much, but it’s all there is out there at the moment.

For an idea on the weapons, here are 2 tweets from Production Designer/ Art Director Peter Mihaichuk.

just visited an awesome props shop… they were making weapons for the new Thor movie, and some Star Wars droids. I contained my inner geek.

@Marvel_Freshman There were a few items, most notably were a huge ass mace and a massive 2 handed sword.

Who ever is going to wield the sword is unknown, but it’s only logical that the mace is for Hogun The Grim. No, he’s not a villian. 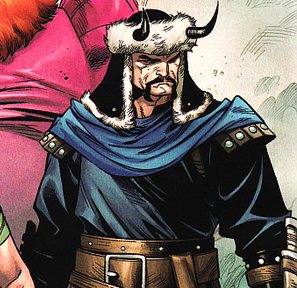 It should be noted that Hogun has wielded a sword several times. If we get lucky, for eye candy we’ll see him armed with both in an epic battle with Thor and other allies. Speaking of epic, here’s another tweet from a motion stuntman, Jeremy Dunn.

It’s Thor, so this movie is bound to have “big scenes” to give the character justice. That good little tweet should put worrying fans at ease if there was any doubt. Check out comicbookmovie.com for even more tweets.

We’ve already gotten an Iron Man 2 viral, and with these few Twitter updates Thor has started up as well. They’re all linked to the Avengers movie so this is a good time to start a joint viral with all three movies. They make a perfect team.

Do you think big scenes and weapons sound good or bad for the God of Thunder? Fan or not, you’re always welcome to say it in the comments.