What happens when you can’t show something in a commercial, even though you know your customers do exactly this, because it’s illegal?

Don’t make a commercial…..make a film!

That’s exactly what BMW did with it’s great series of shorts for its line of cars in order to show just how ballsy their cars are. By bringing on some of the best directors (Ritchie, Woo) as well as some great actors, they let you see what a BMW can really do, with the help of some smoke and mirrors of course. Also, pay attention to the driver. You may know him as this series is what pushed him to where his is today in film. Quite a strong presence for a car.

Now let’s take a look at another campaign, only this time, for Audi. Yes, I know there are two high end cars in this article, but I just don’t see a Dodge mini-van pulling out all the stops for this type of marketing. 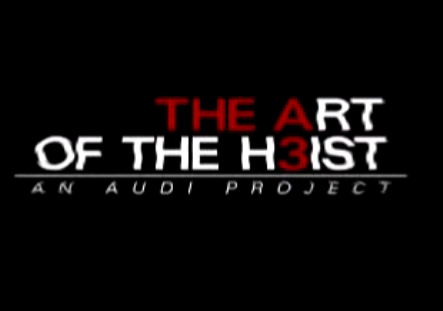 A while back, we had an interview with Michael Monello of Campfire, and at the beginning, he mentioned Audi, and “The Art of the Heist”. This wasn’t a film like you just watched with BMW, although it does have it’s theatrical moments. This was full on ARG and a “in your face” type of participation, which all starts with something just as illegal as above. A robbery. Take a look.

So what do you think? We need more of this kind of viral marketing in the commercial world? It’s obviously works, so why aren’t we seeing more of it. Or are we, and we just haven’t realized it yet?