Normally any anonymous rumor (especially for big movies) is immediately disregarded and thrown to the rumor mill trash bin, but recent news can support the rumors this time for the potential sequel to The Dark Knight. Brent Sprecher, an editor from comicbookmovie.com, has several little tip-offs from a “Plot Outliner” at Warner Bros, who wished to remain anonymous. Check them out after the jump.


One of the rumors is that Commissioner Gordon will mention Metropolis and maybe Lex Luthor. This may seem laughable at first but recall how director Christopher Nolan is helping out in the next Superman movie. This isn’t something like Goyer giving a Blade cameo, this easter egg can happen after all. With Nolan working on both the Batman and Superman movies, there’s bound to be a little slip for fan-service.

The “Riddler being the main villain” rumor has been beaten to death since The Dark Knight came out. Now its been brought up again, but this time The Riddler may have more back up than before, and get a lot more dangerous.

The Dark Knight was able to handle three villains (just one of it’s many accomplishments), so the next one in line is bound to have at least the same amount or more. That being said, give a warm welcome to The Penguin, and a cold welcome to Dr. Fries (supposedly he doesn’t turn into Mr. Freeze yet). That’s only some of the villains to possibly make a cameo. Also, Gotham’s Dark Knight will have bigger problems than just trying to fight several villains at once, because the Riddler apparently is going to achieve something only Raz (and a random Wayne employee) has achieved: He’ll learn Batman’s identity. This spells out a whole lot of fun and makes The Riddler a lot more dangerous. With his love for another woman out of the picture, what better target than his power as a symbol now? 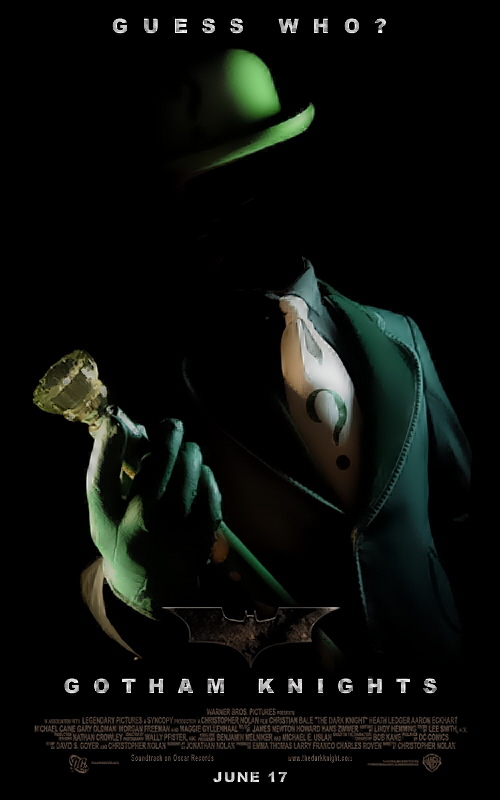 Speaking of women, we might get Barbara Gordon in the mix as well. Whether she’ll dawn the Batgirl suit and aid Batman with teamwork and seduction is unsure. The same goes for Dick Grayson and his appearance as the colorful Robin. Those two are rumored appear, but not yet as superheroes. In the end these are still rumors.

Well this is all great, but where is the but where are the rumors for any Joker appearance? Do you want him to join in on the fun for the next Batman film along with all the other cameos and references? Are you praying for a Blade interference from Goyer too? Well, maybe not that last one, but for everything else you can let us know in the comments.
BatmanBatman BeginsThe Dark Knight