Most films that have viral campaigns do so because there is so much backstory worth exploring, yet they cannot waste time (and pacing) in the film to flesh it all out. The Crazies falls into that category, as the events leading up to the outbreak are glossed over in favor of getting right to the action. Fortunately, along with the viral campaign, the filmmakers decided to release comic books to give us some more insight into the outbreak itself. There are four comics in total, each named after one of the water sources that deliver the toxin to the town. The first two issues are set to be in stores today, but we got an advanced copy. Check out my review of “Hopman Bog” and “Dwyer Creek” after the jump, as well as the interesting packaging I received them in, and even a trailer.

I won’t go into great details about the stories. I don’t want to spoil anything, especially since they are relatively short comics. Each issue follows a secondary character in the film. For the sake of time, the movie mostly follows Sheriff Dutten and his wife, so the comics give a different perspective to the situation. Issue #1, “Hopman Bog” follows Rory Hammill, the town’s pig farmer, as he and his pigs slowly go “crazy.” Next we have issue #2, “Dwyer Creek”, where Bill Farnum, a cattle rancher, as he and his cattle go crazy (see a trend?). 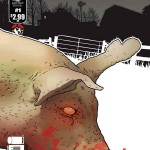 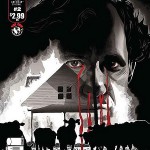 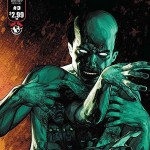 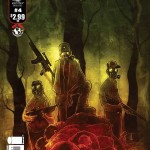 The covers and overall artwork are beautiful and frenetic, as something like this should be. You definitely can feel the “craziness” creeping into the main characters. I found “Hopman” a little confusing, while “Dwyer” was more straight forward, and you could really see how the virus works. In Hopman, the tap water is the source of Trixie (see: Crazies Viral Page for more) for Hammill and pigs, while the creek is the source in issue 2. The beginning of “Hopman” includes a difficult to understand plane crash that doesn’t seem to link to the story at all.

So, what do we learn from the first two issues of The Crazies comics? Well, we get inside view of how the virus takes over your mind. For Hammill, it was paranoid delusions, and for Farnum, it was a voice inside his head that sometimes shows up as an evil twin. Either way, its these hallucinations that push the character to do very violent acts. We also see how you can spot early signs of infection. Both animals and humans get nose bleeds right before turning (see our Kim Jonson video for a great example of that). For me, it was great to see the story from the infected person’s perspective, as it actually makes you feel for the character.

The third and fourth issues are released on February 24, so I’ll be interested in reading those. Issue #3 is “Black Pond”, revolving around the mortician Charlie Finly (those graphics should be amazing), while issue #4, “Ogden Marsh”, follows three deranged duck hunters. Just as a side, here’s the cool packaging we got the comics in, as well as a letter from the director, Breck Eisner. 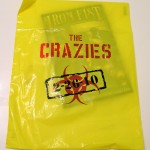 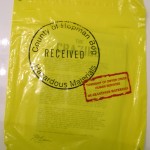 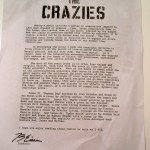