There are a lot of procedural shows on right now, shows in which a problem is introduced, investigated and solved all within the same episode (think CSI, Bones, almost every one hour show other than LOST). Many have gimmicks to try to separate them from the bunch (his partner is a psychic!), and one of my favorite gimmick procedurals is Numb3rs on CBS. There’s a nifty website created to supplement the show.

The show centers on the Los Angeles branch of the FBI, where agent Eppes (rob Morrow) has a brother who is a math genius and professor at Cal Tech. Each episode has Professor Eppes (David Krumholtz) using advanced mathematics to help solve a case. For us regular folk, this stuff goes over our head, but if you are interested in the math, Wolfram (makers of software Mathematica) have teamed up with the show to help you out. 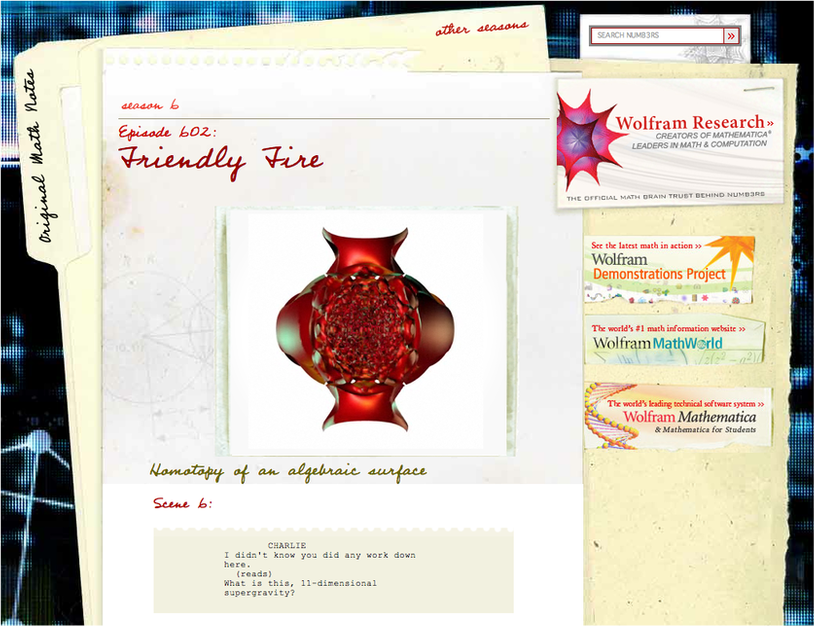 Wolfram’s Numb3rs website goes through each episode and explains the mathematical principals the characters are using or talking about. The well designed site is meant to look like a case file being opened, and you can watch videos that show the math. For a much more detailed look at the science, each concept has a link to it’s own Wolfram page. It’s nice to know that the characters aren’t talking gibberish, and this kind of stuff can actually work.