In tonight’s episode of LOST, we learn a bit more about what the numbers mean, whose side Claire is really on, and how one character in the alternate universe now has a kid. Check out the full recap and review of the Jack-centric 108th episode of ABC’s LOST, including what its title “Lighthouse” means, after the jump.

Like always, it’s easiest to explain the story in its segments as opposed to chronologically, so lets start with the flash-parallel (we need a real name for this). Jack gets a call from his mom, Margo, about how she can’t find Jack’s father’s Will, and he ends up being late for picking up his son from school. That’s right, he has a son named David, who’s in his early teens maybe. We find out Jack and David’s mother (presumably Sarah, though it’s almost deliberately kept in the dark) are separated and Jack only sees David once a month, though even that’s too much for David. Jack goes to his mother’s house, and he gets a bit of insight into why David feels antagonistic towards him. Margo finds the Will, but she is surprised to see someone named Claire Littleton is in it. We obviously know that Claire is Christian’s illegitimate child, but he apparently legitimizes her in death. Jack goes home to find that David is gone, and eventually finds his son playing piano at recital . He’s overwhelmed with emotion, and sees Dogen with his son at the recital as well. Afterwards, David tells Jack his problem is being afraid of failing in front of him, and Jack tells him he’ll love him no matter what. Aww.

Now to the good stuff. Hurley gets Jack to follow him, after Jacob tells Hurley that someone is coming to the Island and they need his help. Along the way, they find Kate, who decides not to tag along and find Claire instead, even though Jack tells her that something has happened to Claire (the sickness). Hurley and Jack also come across the cave the original survivors stayed in during season 1, and even mentions how the adam and eve skeletons might be them, thanks to the time traveling problems they’ve had. The two end up at a very old Lighthouse. They get to the top and have to turn the wheel (which turns the mirrors, as old lighthouses used to use to direct light) to 108 degrees. However, as Hurley turns it, Jack sees other locations in the mirror. He looks down at the number markings on the wheel and sees that names are on each degree mark. The numbers next to the Candidates names coincide with those in the cave wall. Jack makes Hurley turn the wheel to his own number (23), and sees his old house in the mirror. Upon realizing Jacob’s been following him since childhood, Jack smashes the mirrors in anger. Jacob later tells Hurley he meant for that to happen, because Jack needed to realize his importance. Also, he wanted to get them away from the Temple because Smokey was coming and it’s too late. 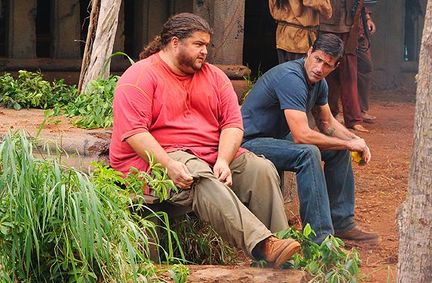 Ok, now to the really good stuff. As you may remember, Claire found Jin in the bear trap. So, she takes him back to her house of horrors camp, where she bandages him up. She finds the black Other who tried to kill Jin and interrogates him about where her baby (Aaron) is, thinking they took Aaron because her father (Christian) and her unidentified “friend” told her so. Jin tells her Kate took Aaron to save the guy, but Claire kills him anyway. Jin realizes that was a mistake and lies to Claire, telling her the Others really do have Aaron. Good thing, because otherwise, Claire would kill Kate. This segment has that whole Misery feel towards it, where you never knew when Claire was going to snap. The kicker comes at the end, when fake Locke walks in, revealing himself to be the “friend”.

So, what to make of all this. What is up with that lighthouse? How has it not been found or mentioned before? Why and how is it designed to show homes of the Candidates? Is Sarah Jack’s ex in this new timeline? If so, they had to meet earlier than in the original timeline in order to have David be this old. Also, there seems to be a lot of parallels to other characters and relationships being shown in this episode. Jack and David’s relationship is similar both to Jack and Christian’s and Michael and Walt’s. Dogen showing up in Jack’s flash-parallel is similar to Ben showing up in Locke’s, especially since both alternate characters are so different from the original. Not to mention Claire’s obvious impersonation of Danielle Rousseau, “where’s my baby?” pleas and all. Are these intention, and if so, why?

The assumption has been that the alternate reality character will start to remember the events of the original timeline (thanks to some evidence, including longing looks and the name “Aaron” popping up). Now we seem to have a physical connection. In the flash-parallel, Jack looks down and sees a scar on his abdomen, and though he can’t remember how he got it, he assumes its from getting his appendix taken out. However, we know it’s from him getting shot in the original timeline. It should be interesting to see how it plays out.

What did you learn from this episode, and what questions do you have? Be sure to check out next week’s episode “Sundown” along with our review.