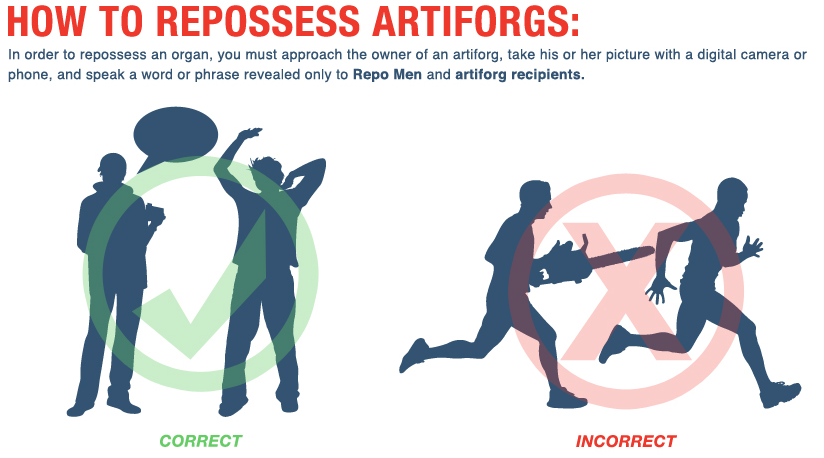 We reported yesterday that The Union had decided that people who have fallen behind in their payments will have their Artiforg’s reposed. Now The Union’s Human Resources Department are looking for Repo Men to chase down those unfortunate souls who have their artificial implants inside them.

Head over to the website to apply. Those that successfully capture someone who is on the run will receive a bounty of $7,500 for their troubles – so it’s well worth applying.

To be in with a chance to win, watch your e-mail box and look for the tips and clues to track them down. Judging the previous campaign by Sponsors Wired, Lone Shark Games and Universal Pictures it looks you’ll have to be on your toes to see the clues. Appearing anywhere from billboards to crosswords the clues will take this ARG into the real world.

In other news, it appears Universal has sneakily moved the release date to March the 19th, which is good news for us at MovieViral, as we are all quite excited by the potential this film has. Also, our friends over at JoBlo.com have found some cool new posters. The posters depict the Repo Men as faceless figures with a-lot of presence. What’s also interesting is the inclusion of bar-codes on both posters. Recently, through the advent of mobile phones, we’ve seen that these bar-codes sometimes scan and direct you to a website, so if anyone sees them at the cinema, scan the bar-code and let us know if anything happens.

This all looks very exciting, but unfortunately the Artiforg hunt is only open to the U.S. and Canada, so I won’t be taking part, but if you are, post your experience below and let us know how your doing. We might even be able to solve the clue and help you catch them! Leave your comments below.