Tron Legacy: The Game Is On

For those following the Tron Legacy viral, the coded countdown just ended on the Zero Hours Flynn Lives website, and now there’s a game board on said site. On it, there’s the list of cities, what looks like a game board with squares that have random numbers, and an empty list of “field operatives” along with what might be another game board. Find out more after the jump, including all updates.

The cities are listed on the right hand side, and look to go live at a staggered rate (possibly hourly). Currently Chicago, Orlando, and Paris have links to PDFs that give you a time (right now) and exact location to meet someone with a Flynn Lives t-shirt and get a code. These locations are so far all arcades (and near IMAX theatres). Once you (yes, you!) get the code, you enter it on the site. Then what? We’re not sure at the moment, it looks like the top game field will be filled out in some way. 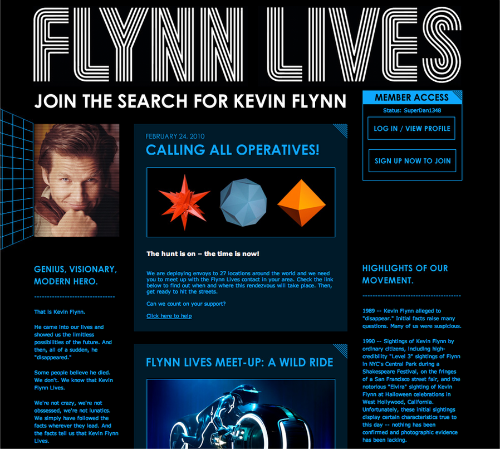 We’re still not sure what the list of field operatives is for; it might be a list of those who participate, or something else entirely. The main page has also been updated, and it looks good. I especially like the recap of the Comic-Con event. Also, it now has the member profiles, which I’m sure will come in handy during the course of the game.

We’ll continue to update the article below as we get more information, but if you are in those areas when they go live, get a code!

* Paris and Chicago now have check marks next to them, likely meaning someone has entered the code.
* Altlanta, Boston, and Madrid are now open, confirming it’s staggered hourly.
* Orlando and Atlanta are now checked off, and a few of the squares in the grid are filled in with original Tron pictures. When you flip them, it looks like the whole thing might reveal a photo.
* Madrid is the only one of the first two batches not checked off. Austiin, London, and New York (1) are now open. More squares are filled and it’s definitely a picture from the new Tron, though not sure why.
* The “Field Operatives” list has started to be filled out, though it just looks like screennames. I’m still not sure who they are. Notice how multiple names appear.
* Philadelphia, Raleigh, and Washington DC are now open. Also, Twitter user Datan0de informed us that the numbers on the grid squares correspond to the those on the Tron trading cards that the pictures are from. Not sure if it helps, but that’s a great catch.
* The Paris winner has a detailed description of the whole process of getting the code. Check it out here.
* Los Angeles, Nashville, and Portland are now open.
* Minneapolis, San Francisco, and Toronto are now open. The picture seems to be a Tron opponent walking down a hallway into a bright light.
* Madrid has been cancelled because no one came. I guess Tron isn’t popular there.
* Facebook fan page for Flynn Lives is live. Some other field operatives (winners) have posted their own pictures and accounts.
* Denver, Salt Lake City, and San Diego are now live.
* New York (2), Phoenix, and Seattle are now available.