Well, talk about a viral campaign. Tron Legacy is still coming out with new viral sites, clues, and so much more. I’ve been working with Unfiction and many others to keep all of our readers up-to-date on the latest, and I’m trying my hardest continue to do so. These new updates are immense, so read more after the jump (and see how the bits were made)!

Well, there are three new viral sites. And to make things easier, I’m going to try to break the forum, which is where the other two sites were located.

First, a new discussion forum was discovered by Facebook user Al Wichrowski and it’s pretty intense. The forum was found using some binary thing I know nothing about. 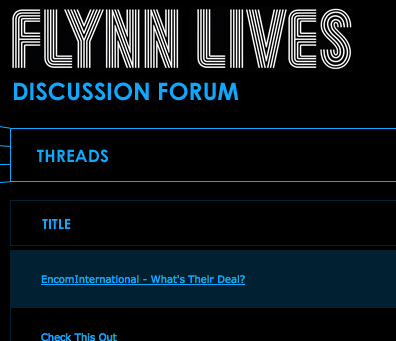 Think I got it! The flashing light does translate to binary but only count the top 3 characters as a number while using all 4 characters as a break – gives you 34, 16, 51, 50, 32, 07. When you flip the corresponding pictures over on the zero hour website it brings you to a “Discussion Forum”.

The link to that forum: http://www.flynnlives.com/discussionforums/

There are multiple posts, and there are no way to post your own topics or replies, so this is an in-game only forum. There are a lot of members who have been chatting since November 2008. The site includes dialog between, I’ll call them, “characters” you should definitely check out. However, here’s some of the highlights (and the other two sites).

1. The interesting part is obviously the site this reveals, http://qm6k3pshu8rr302kv6xej8p72s.net/default.htm. The site contains sketches of a lightcycle (according to character ZackAttack). Definitely check it out, I have no idea what I’m looking at. Also, one of the characters said they tried to break the URL, as if it was a code, but failed. I wouldn’t be surprised if it was a code, but I also wouldn’t be surprised if it wasn’t a code.

2. Again, this post reveals a new website, http://n8xd93f2rk077px1n6wdq839m0.net. Apparently of another lightcycle. The mention in both posts how the sketches look a lot like Kevin Flynn’s sketches.

3. This is my favorite. It contains a video that shows how the bits we received in the mail were made. To check it out directly, click here.

That’s all I’m going to mention, but definitely check out the forum for more dialog between characters – it’s pretty cool. Something tells me there will be even more news coming out of Tron within the next few days (obviously, with the IMAX event) – so we’ll keep you posted.

UPDATE #2 11:02AM: Another new website has been found, this one for the fictional company Ecom. Check it out: http://encominternational.com/ 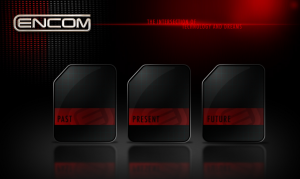 UPDATE #1 1:09AM: That was fast. Thanks to Hazado over at the Tron Sector forum for cleaning up the image of the lightcyle! Click for the full image: 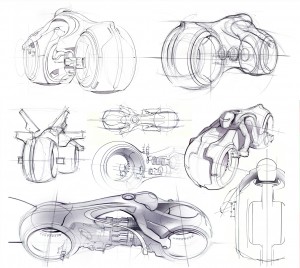 What do you think? Does this remind you of The Dark Knight and Cloverfield? How have you enjoyed the viral so far? Leave a comment below!