In tonight’s episode of LOST, again appropriately titled “Sundown”, we learn about Sayid’s life after getting off the plane in the alternate universe, and Fake Locke sets an ultimatum to everyone in the temple. How does it all turn out? What does it mean for the show’s ending? Find out after the jump.

Maybe it was just me, but this episode seemed to be a lot simpler than the others this season in terms of story lines to follow. If fact, it reminded me of the first season style. The final season seems to be deliberately mirroring the first, and I think it’s a great touch. In this regard, the episodes are becoming simpler, while in the first season, they got more complicated. Now to the story at hand.

In Sayid’s Flash-Sideways story, Sayid returns to Los Angeles and the home of his long lost love Nadia. However, in this universe, Nadia is married to Sayid’s brother Omer, owner of a dry cleaners, and they have two kids together. It’s clear Sayid still has feelings for her (and vice versa), but as we find out later, Sayid pushed her towards his brother because he feels he doesn’t deserve her. Sayid is trying to shed his past (as an Iraqi torturer), but Omer has a problem that only Sayid can solve. He opened a second store, but had to borrow money from a loan shark who keeps asking for more. After Sayid refuses to help, Omer gets beat up badly, and Sayid is forced to meet with with Omar and Keamy, the loan shark (you may remember them as the mercenaries from Season 4). Sayid decides to kill the men, possibly realizing he can never really escape his past. He then finds Jin tied up. Hmm.

Back on the Island, Sayid would really like to know why Dogen wants him dead. Dogen tells him that the test (i.e. torture) they performed on him somehow shows what side of the good/evil balance you are on. As you can guess, Sayid fell on the evil side. The two fight, but when Dogen’s baseball hits the floor, he ends it and requests Sayid to leave forever. Before he can do so, however, Claire enters the temple and says Fake Locke wants to talk to Dogen. He knows it could be a trick, so at Claire’s inference, he has Sayid go see him. However, he tells Sayid to kill him right away because Fake Locke is evil incarnate. So, Sayid tries to kill Locke, but it doesn’t work, and Locke just gives him the message he wanted to send anyway. Sayid goes back to the temple, and tells everyone that Jacob is dead, and they have the choice to stay and die or leave the Island with Locke. 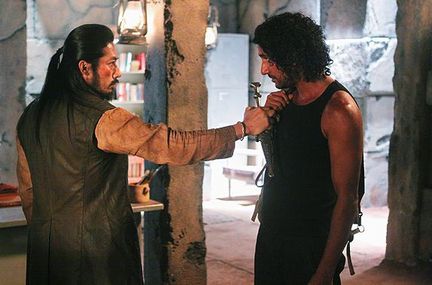 Finally, it’s sundown, where all the fun happens. Sayid finds out Dogen’s baseball belonged to his son who died. Jacob had told him his son could live if he came to the Island, thus why he is here. Sayid seems touched, but then kills Dogen and Lennon. Kate had come back to the temple and tries to get Claire to leave with her, but Claire knows she’s safe. Smokey (Locke) attacks the temple, and then the family reunion starts. Ilana’s group (which includes Sun, Ben, and Frank) help get Miles out of the temple. Claire and Sayid, along with a very confused Kate. meet up with Fake Locke and several Others outside. They then set out to who knows where.

As I always ask, what did we learn? Well, Fake Locke finally got into the temple and got a nice following, which for some reason is really important. It’s nice to see the other batch of characters (Ilana, etc.) finally back in the picture starting to form into a single group again. Sun knows Jin is alive somewhere on Island, Kate knows Claire is alive, and unfortunately, Claire knows Kate took her baby. My big question is why Fake Locke can’t die when Jacob could? We again see some alt universe crossover with the mercenaries and Jin, and Sayid has a similar character arc in each. There were plenty of other episode references as usual.

So, what do you think will happen next? Will Jack, Hurley and Ilana’s gang have to fight Fake Locke and his new gang? Let us know in the comments below. Next week’s episode is titled “Dr. Linus”.