We’ve been reporting on the activities of the Repo Men ARG from the start, and since the hunt has reached the end of its first week, we thought we’d give you an update of what’s been going on. If you’ve been following the activities of Ciji, Will, Alex and Usman, you’ll know that they have been on the run for a week and are still out there, hiding in plain sight. So how have they been getting on?

So far no one has been caught yet, but the clues are stacking up. As the Repo Men (those who sign up to hunt) learn more about their targets and find out more about their habbits, they are getting closer to finding them. If a Repo Man finds a runner (in person), they win the $7,000 bounty. If the runner can stay hidden for a month, they win the prize. Simple as that.

Throughout their time on the run, each runner has to particitpate in and complete a challenge. This proves that they have not just boarded themselves in a hole, as well as keeps them outdoors and active. If they fail to complete the challenge, GPS information is released, allowing Repo Men to gain valuable information on their whereabouts. If you visit the website you’ll see there is a Runners Intel Map that pinpoints the latest known locations of each of the runners and shows it on Google Maps

As well as GPS information and clues, a new website has been launched. Known as A.R.G.U.S. (Artiforg Repossession Group: Underground Resources). It allows registered Repo Men to log-in and see what challenges have been set for the runners. Tasks include such things as watching the Olympics closing ceremonies in a public place, or talking to a hunter for 2 minutes.

As promised, clues have been found in the strangest of places. The New York Times ran an article, The Wired Repo Man — He’s Not ‘As Seen on TV.’ , which included a hidden code that has been deciphered by some of the Repo Men on the hunt. It was also found out that there is information in the film trailer as well. Hidden in some of the frames of the latest trailer itself is information for the runners. Sneaky!

Here’s a quick update on each runner with what we know so far, sourced from the Repo Men page.

All runners were given the following tech items for use in the hunt:

*Will (NASHVILLE):
– sent a picture from Crown Candy, a restaurant in St. Louis, MO
– is a definite morning person, usually waking up around 4-5:30am (according to his brother)
– is very attached to his guitar (may or may not have it with him)

*Ciji (NEW YORK):
– is a big-time (professional) gamer
– completed the task of taking a picture of herself in front of a fireplace
– was at Family Fun Arcade in Granada Hills on 02/25 (not verified)
– had bright red hair and lots of visible tattoos, but in recent pictures from the hunt, her appearance is toned down and she is wearing fingerless gloves

*Usman (LAS CRUCES):
– might be tweeting from @scarekid
– writes poetry, can sing and has played in many Shakespearean productions
– sent a picture from Balboa Park and took video at a public library in San Diego, CA
– is short (according to a friend)
– often carries a black backpack and has a shaved head

*Alex (LOUISIANA):
– completed the tasks of going to see a PG-rated movie and buying a book
– has been blurring some content on images (access to Photoshop?)
– is a night owl
– might be easily identified by her blonde hair, big sunglasses and bring clothing
– loves Jack in the Box, Las Vegas and Nine Inch Nails

So have you been hunting down any of the Artiforgs? Leave your experiences below! Well done to the Aritforgs so far for keeping your heads down. If you want to be careless, leave a comment below as well! For the rest of you, what do you think?  I’m impressed so far, but I’d like to hear your thoughts! 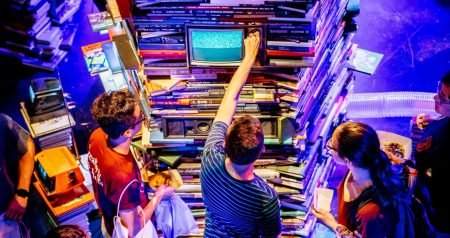