ABC’s LOST just premiered it’s 7th episode tonight, “Dr. Linus”. The new episodes keep getting better and better, with each new one becoming my favorite every week. This episode is again character-centric, following Michael Emerson’s character Ben Linus on and off the island (in the alternative reality). The promo for “Dr. Linus” implied that Ben Linus would die in the episode, which made me mad because he became one of my favorite characters (probably second only to ‘new’/old Locke), and I really wasn’t ready for him to die, especially the way they hinted at it. “Dr. Linus” is easily one of my favorite episodes of LOST, but, still has flaws that made me completely angry at the show. I’ll explain them (and let you know if Ben really does die) after the jump!

Ben Linus is the once feared leader of The Others, the original inhabitants of the island, and the man who followed Jacob’s every word without question or doubt. That is until Oceanic 815 crashed and he met John Locke, a paralyzed man who once on the island was able to walk again. Ben is a very manipulative man, he’s power-hungry and egotistical, he even let his own daughter (well, one he stole…but that’s a complicated story) die in front of him, in sake of the island. He killed his own father and an entire scientific community in the name of the island. Basically, he’s pure evil.

In this episode, the story focuses on Ben Linus on and off the island as both the feared leader he once was on the island, and the humble, innocent history teacher that only wanted the best for his students. I’ll split the recap into two separate summaries explaining “Island Ben” and “History Teacher Ben”. Island Ben is first seen wondering through the jungle, escaping from the massacre that happened in Sundown (read the review for “Sundown” here) and meeting up with those who escaped too. Ilana, Frank, Sun, and, Miles are the only known survivors of the Temple and decide to head to the beach to wait out whatever happens next, when Ilana asks Miles (a psychic) what actually happened to Jacob, to which Miles tells her the truth, that it was Ben who had killed him. Ben is quick on his feet and a very convincing man, so he tries to tell Ilana that Miles was wrong, but she doesn’t believe him and eventually comes to the conclusion that she was going to kill Ben, after she forced him to dig his own grave. 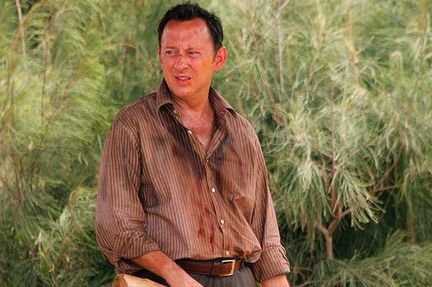 As he digs his own grave, Flocke (Fake Locke) shows up and tells him he can escape and join them at the Hydra station, which is on the other, smaller island. He also lets Ben know that there is a gun at a tree, ready for when Ilana comes to chase him. Flocke frees Ben and Ben hesitates to run, but eventually he runs out of there like a bat out of hell with Ilana taking chase after him into the jungle. Eventually she catches up to him but Ben has the gun and tells her to drop hers. She asks Ben what he’s waiting for, and Ben shows the dread, the pain, the terror he’s built up in the past few seasons. He explains to her how he’s flawed, how he let Alex die, how he killed Jacob because he was confused, scared and angry at him for giving him nothing, and how Jacob didn’t care. Ilana asks Ben what he wants and Ben pleads that he just wants to be accepted. Beautiful scene.

In the alternate universe, we first see Dr. Linus (first appearing in The Substitute ) as he’s teaching a history class. He’s a hopeful teacher, polite and harmless, complete opposite of “Island Ben”. Dr. Linus is a teacher with a grudge against the school system for how they’ve seemingly given up on the kids. Ben knows things can be done and there is still hope, but his boss, Principal Reynolds seemingly doesn’t care and just wants Dr. Linus to watch the kids in detention after school, thus messing up his History Club, for which he cares deeply. In this episode, we re-meet his father, a sickly old man who only wanted the best for his kid he treated bad while in the Dhrama Initiative, the scientific community Island Ben kills off, along with his father in the other reality. This version of Ben is actually a very simplistic Ben. He teaches and takes care of his father, all the while wanting more bigger and better things. As he talks with his dad, the door bell rings and as he answers the door, we see that it’s Alex, his daughter in the other reality, which he let die. This time she’s a student of his and very fond of him as a teacher. Eventually Ben finds out through Alex that Principal Reynolds is having an affair with the school nurse, and decides to blackmail him to become the new principal of the school for keeping quiet about the affair. In this dilemma, Reynolds shows Linus an email that Alex had sent him, asking for a letter of recommendation for her college applications. In this, Linus has to choose between the job, or the future of his favorite student, he chooses the latter.

Like I said in the beginning, this is a great episode, but it has flaws, and while they’re small, they literally just ate at me throughout the show. Like when Sun asks Ben something completely redundant, or when Jack and Hurley meet up with Richard on their way back to the temple, and Jack asks where Richard has been and Richards said “not now”. It was just mind-blowingly annoying, I mean come on! They can tells us SOMETHING, don’t leave us hanging over a SIMPLE QUESTION! But they also completely made up for it buy answering Richard Alpert’s origins (for now) and his aging problem, which I expected from back in Season 5’s The Incident when Jacob touches people and they, well, can’t die. Richard wants to kill himself but can’t because Jacob gave him what he calls now calls “a curse”. Jacob has touched Kate, Hurley, Jin and Sun, Jack, Locke, Hugo, and Sawyer in The Incident, making them all candidates to replace Jacob (and thus unable to die?). Richard takes Hugo and Jack to the Black Rock, the ship Richard came in on originally, as a slave. This was a completely fantastic episode, which ended with a submarine coming to the island and finally revealing it to have Charles Widmore on board. Widmore, the once leader of The Others, father of Penny Widmore (Desmond Hume’s wife), and enemy of Ben Linus. This leaves us only to wonder what happens in next weeks episode “Recon”.

What did you think of the the LOST episode “Dr. Linus”?