We’ve been trying to keep you all updated on the disturbing viral campaign known as “Iamamiwhoami” that seems to be a for a musician, and now we have a new development that may answer at least some of the questions we have. After a new video posted this weekend gave us a closer look at the “star” of the videos, there has been some speculation as to know is behind it. Find out who after the jump.

The videos started out as just highly-stylized scenes in nature that would make Tim Burton squirm in awkwardness: Hands coming out of nowhere, eery sounds, warping images, the works. The sixth video in the series, released earlier this month, finally gave us a look at a central character, a blond woman covered in black paint and digitally altered to show huge eyes. Several factors, including a creepy package sent to MTV music HQ has lead the theorists to believe a singer, band, or group is behind this, though guesses at who it is have gone nowhere.

On Sunday, the seventh video was released on the Iamamiwhoami YouTube channel, and it features (presumably) the same woman for most of it. This video in particular has more of a music video vibe to it, and again the woman’s identity is obscured thanks this time to something that looks like a combination of masking tape and latex. Check it out below.

Like all the videos, this again has only a link in the description, which again leads to a complete random video. This time however, there is not a coded number sequence for the title, just the letter “B”. Of course, with the video showing the woman a lot more, there has been more speculation as to her identity. The leading suspect this time is Swedish singer Jonna Lee.

MTV lays out a decent case for Lee being the leading woman in the video series, despite her reps denying her involvement. Click on her picture below to see if you can find the resemblance. Her latest single and music video for the song “Something So Quiet” have sort of a similar vibe to the viral videos, but it’s kind of stretching it. She is, however, working on a new album, and her music label Razzia isn’t commenting. 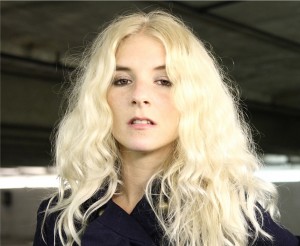 So, what do you think? Is Jonna Lee behind all of this?
IamamiwhoamiJonna LeeMusicMusic Video