The theatrical release of Lionsgate’s Kick-Ass is less than a month away, and all the Internet promotions are starting to pour in. Director Matthew Vaughn is taking part in live interview on Facebook, there’s now an iPhone/iPod Touch App for the film, and we have a few new TV spots and even a new trailer. See all the goodness after the break.

First off, next Tuesday (March 23rd) at 9am PST, Vaughn will be answering questions from Facebook users on the Kick-Ass Facebook fan page. You can submit your questions to the wall once you sign up as a fan. Hopefully we may get some glimpses into the potential sequel as well as what the production process was like. Lionsgate has also released an iPhone App called “Kick-A*s: Photobomb“, where you can take a photo from your library or camera roll and spruce it up to look like a superhero. 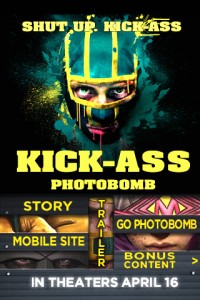 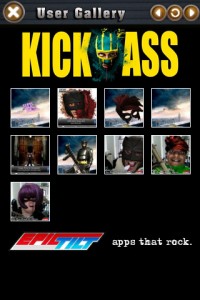 The free App also has the movie’s trailer. Speaking of which, a new 60 second trailer has hit iTunes, and a few TV spots have popped up as well. Check out the trailer below and go to ComicBookMovie.com to see the TV spots.