This week’s episode of ABC’s LOST, “Ab Aeterno”, is finally the long awaited Richard-centric episode. Appearing in “Not in Portland,” Richard Alpert has been a man of mystery.  A seemingly ageless man, Richard is the representative of Jacob and once leader of the others, even taking in Ben Linus who wanted to live with The Others instead of the Dharma Initiative (Ben killed the entire Dharma Initiative in the process). Shrouded in complete mystery, save a few hints here and there, Richard is a completely unknown character when it comes to his life before and on the Island. This episode is finally the episode that answers it all.

The episode beings with Ilana in the hospital, as seen originally in season 5’s “The Incident”, with her talking to Jacob. Jacob tells her there are new candidates she’ll need to protect. Being a follower and believer in Jacob, she instantly accepts the job. Flash to present day Island; Jack, Sun, Hugo, Ben, Miles, Frank, Ilana, and Richard are all at the original camp on the beach. Ilana informs us that in order to go on about their mission, they need to ask Richard what to do, but sadly, Richard has no idea and seems to have lost his mind, yelling at them and telling them they’re dead and in Hell, eventually storming off into the jungle. 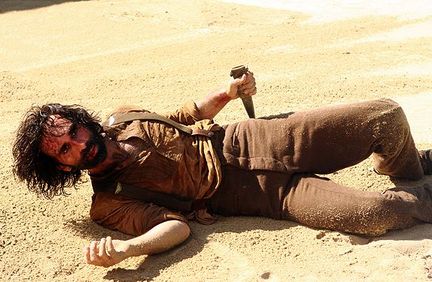 Richard desperately tries to escape from being in chains, but is met by the Man in Black, who beforehand appears as his dead wife Isabella, telling Richard they are dead and in Hell and runs off up the ships stairs and is killed by the black smoke (all an illusion by Man in Black). The Man in Black helps him get out of his chains, but not before asking for him to kill the Devil so they can escape from Hell. Richard agrees to do so and is freed, given a dagger and is told by the Man in Black that he must kill Jacob upon sight, not letting him speak to him first or it will be too late (much like Dogen said to Sayid in Sundown). Richard sets off to the temple, like Man in Black told him to, getting ambushed by Jacob in the process and beaten down by him right outside of the statue. Jacob and Richard talk and Richard comes to realize that the Man in Black is actually the evil force, that Jacob is the good guy. When Jacob asks what Richard wants the most, he tells him he wants his wife back. Jacob says he can’t. Richard then says that he wants to live forever and never die. Jacob touches him and he get’s what he wished for. Richard goes back into the jungle and is met by an angry Man in Black, who says that if he ever changes his mind, he’ll be there to help him get back to his wife. Richard then buries the necklace his wife gave to him.

Back to the present, Richard arrives at a big tree, he comes to where he originally buries the necklace and digs it up, yelling in the jungle that he’s ready for Man in Black’s offer. Hugo walks out of the jungle and to a much surprised Richard, he tells him that Richard’s wife sent him there. With Richard not believing him at first, Hugo tells him his wife’s name, that her death wasn’t his fault and that she wanted to know why he had buried the necklace. Hugo tells Richard that there is one last thing his wife wants him to do, and that is to kill the Man in Black, because if he doesn’t, they all will go to Hell. The entire time this is happening, Flocke (Man in Black) is watching from a distance. Next we see a flashback of Man in Black and as he sits on a log and is met up with Jacob, who gives him a wine jar, as a present. This is supposed to represent the evil bottled up from the rest of the world. Man in Black grabs the bottle and breaks it as Jacob walks off.

Overall: “Ab Aeterno” is the episode I’ve personally been waiting to see ever since Richard came into the show. Richard, in my eyes, is one of the most important characters on the show (next to the Man in Black and Jacob,) as every other character has enough back story to them, and we know them well enough. This episode did great justice for the character of Richard and made up for the good but boring Sawyer-centric episode that aired last week. This episode is probably not only my favorite of the season, but the entire series as a whole. I’m glad they finally explained Richard and the Black Rock, and the fact that we got to see the Man in Black in his original form more, and some-what focusing on his story enough to make me question Jacob and his story. I for one think the Man in Black was one of the first candidates but was rejected by Jacob in the end.

What did you think of this week’s episode? Next week we’ll recap “The Package”, the tenth episode of the final season.