How’s this for an Easter Egg? Just Cause 2, the much anticipated sequel to the 2006 hit video game, released on Tuesday. The reviews have been very solid so far, but it’s not just the great open-ending gameplay that’s getting high marks and recognition. For those who don’t watch the show, you may not recognize it, but the game features the LOST Island. Find out more, including video and pictures, after the break.

Just Cause 2 sees the return of Rico Rodriguez as our protagonist. This time he’s on the fictional Southeast Asian island of Panau, trying to overthrow an evil dictator and take on his former boss. But wait, isn’t there another famous fictional island in Southeast Asia? 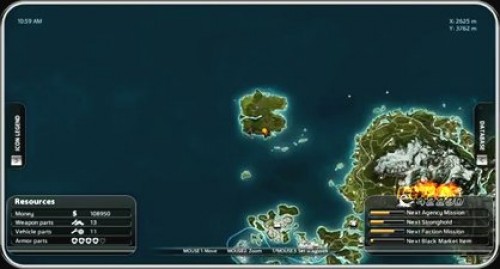 Take a look at the gameplay map, and you’ll see a smaller island that is isolated from the main one. That is in fact the Island from the hit ABC show. How do we know it’s the LOST island? It is not only featured in game, it’s a playable portion of it. If you go to the island, your transport will mysteriously blow up in mid air and crash. Once on the island, you’ll see a few key things that will win you over, including the hatch and hints at the smoke monster. Take a look at the videos below to get a better idea.

There is no word yet on whether ABC or the producers of LOST were involved or approved of the inclusion, but I can’t really see it being a problem if it’s just an homage. In other LOST news, be sure to check out this funny video in which Nestor Carbonell (Richard Alpert) asks LOST executive producers Damon Lindelof and Carlton Cuse about a deleted scene from this week’s episode “Ab Aeterno“.

Thanks to Ryan in our forum for story. Original Source: Game Radar.
Ab AeternoABCIslandJust Cause 2LOSTVideo Game