Sony Music Entertainment has unleashed a pretty impressive contest that gives you the chance win a some great AC/DC and Iron Man 2 stuff. The legendary music group has a strong association of the comic book movie franchise, as evidenced by the Iron Man 2 soundtrack consisting exclusively of AC/DC music. Sony also has a good track record with large prizes, so you know they have something good. 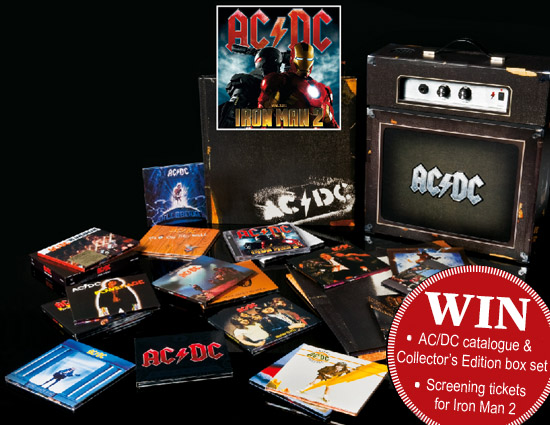 In this no-skill-needed contest, you can win the full AC/DC back catalogue, a working backtracks amplifier box set, and the Iron Man 2 Collector’s Edition Soundtrack. The best prize, however, is the two tickets to an Iron Man 2 screening. The bad part (for us Stateside) is that the screening is in Paramount’s London offices. If you’re still interested, all you have to do is fill out this form. There are bunch of runner-up prizes too, including more tickets to the screening, as well as different versions of the Iron Man 2 soundtrack. All entries are due by April 16th, so get a move on.

AC/DC is under the Columbia label, which is owned by Sony. Their exclusive Iron Man 2 soundtrack will be released on April 19th along with a Vinyl and Collector’s Edition.