While many people bash on Twitter for its seemingly pointless nature, there are many legitimate uses for the website, and even some knowledge to be gained. For instance, as many know, Iron Man 2 director Jon Favreau has been tweeting throughout the Iron Man 2 production process, basically giving us a play-by-play. This has fortunately given us an insight into the timeline of a big budget film, and now that production has finished, let’s learn a bit and break it down after the jump.

From day one on Twitter, Favreau was all about the Iron Man sequel, giving us great insights into the production process and other geek-worthy cool Iron Man stuff. The following is an approximate timeline of the entire Iron Man 2 production based solely on Favreau’s tweets (dates given based on those given by Favreau, not the date of the tweet itself). We’ll just go over the important/interesting parts, and explain anything that Favreau couldn’t in 140 characters. Enjoy.

3/16 – Rehearsals begin, looks to be mostly with supporting cast, not the big names.

4/03 – Final tech scout. The preferred shooting locations have been chosen, so now the heads of the other production departments tour the locations to make sure they suit their needs.

4/06 – Production begins; first day of shooting. Mickey Rourke is shooting scenes, but it looks like Gary Shandling is not yet.

4/14 – First scenes in Tony’s workshop are shot with Downey and Paltrow.

4/17 – Favreau shoots scenes as Happy (the driver from first film), talks to marketing department about Comic-Con.

4/21 – Cheadle and Downey film first scene together, inside Tony’s workshop.

4/23 – First day the shoot is using pyrotechnics. Since Downey isn’t in costume yet and Rourke is probably still on set, there’s a good chance this is the Monaco Grand Prix sequence seen in the trailer.

4/30 – Guys from Industrial Light and Magic (who do most of the post production effects) come down to the set to coordinate efforts. 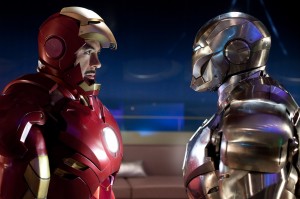 5/04 – ILM on set to do motion capture using their proprietary Imocap technology.

5/06 – Shooting first scene of movie where Downey and Samuel L. Jackson (as Nick Fury) are together.

5/26 – Halfway through filming schedule (whether that’s by shots or date is unclear).

6/08 – Big action scene with Rourke shot. First picture of Whiplash to be revealed next day.

6/11 – Favreau shoots more as Happy. Could his role be bigger in this film?

6/18 – Shandling visits the set. With no other mention of him during production, we can assume this is when he shoots his scene.

6/29 – Rourke’s last day on set. With just about three weeks left of production, Rourke has been there for a majority of the shoot. His villian role should be juicy.

7/12-7/17 – Final week of principal photography. Scenes with Downey, Paltrow, and Cheadle being shot. All three there until the last day. Tony’s Workshop finally dismantled, so it must have a large role in this film as well.

8/10 – While editing probably began within days of shooting being completed, we have our first confirmation of post production. The Stark Expo is being created in the editing room. Most of the Expo scenes (including of course Tony skydiving onto stage) were shot in from of green screen, as it’s easier to add in all the spectacle later.

9/30 – Post production still in full swing, with Favreau working closely with editing process. The lack of tweets since principal photography ended is probably due to Favreau working around the clock.

10/30 – In early stages of working on the score. John Debney (The Passion of the Christ) is scoring the music for the sequel, while Ramin Djawadi (Clash of the Titans) was the composer for the original.

11/12 – Theroux visits the editing bay. Month is consumed by editing, as first trailer goes up in the middle of next month (despite Favreau not mentioning it at all on Twitter).

12/5-12/6 – Favreauspends weekend editing for long hours. Much of his editing tweets are about the weekend, so he must be doing something else during the week.

1/18 – Editing is wrapping up, as today they began “locking reels“. The final video edit is put on film reels (similar to how they are shown in theaters) so that the audio editing process can begin. Locking a reel means no more changes can be made to the video edit. 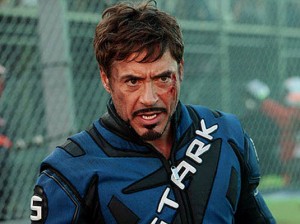 2/13 – Along with ILM, Double Negative Visual Effects working on some of the post production effects for the film. It looks like their work is now mostly done.

2/16 – Final sound mixing begins, working with Skywalker Sound. Cutting in sounds and the musical score with the visual effects.

2/22 – Visual effects still being worked on with ILM.

3/20-3/23 – In a month consumed by mixing sound and visual effects, this weekend sees the AC/DC soundtrack being cut into the film. Favreau (very hands on) also helps on DI color timing, which you can learn about here.

4/1 – After working all day, Iron Man 2 is officially finished and ready to be copy and distributed.


So, that’s it. That’s how a big budget sci-fi/action movie is made (at least the last year or so of what is usually an 18 month or more process). Hopefully we’ll get even more first hand, real time accounts of movie productions in the future. What do you think of the process? Are you surpised how long or short any of it was? Let us know in the comments below.