Clash of the Titans Review: The Kraken is Released, and It Doesn’t Disappoint!

Almost 30 years ago in 1981, legendary producer and stop-motion animator, Ray Harryhausen, released the classic Greek mythology epic, Clash of the Titans, starring Harry Hamlin as the Greek hero Perseus, and Laurence Olivier as Zeus. The film tells the story of how Perseus defeated both the mythical creature, Medusa, and the sea monster known as the Kraken. It became a box office hit that June, and has gone on to inspire many Greek mythology-based films. Now, Louis Leterrier, director of the Transporter series and 2008’s Incredible Hulk revival, has released a remake of Clash of the Titans, with a new look and today’s big-name actors. The question is, does this new adaptation of the ancient Greek myth respect the previous movie or is it just another lame remake shelled out to make money?

The plot of this version of Perseus’ story is similar to the original film, but with some alterations. The people of Argos, an ancient Greek city on the waterfront, decide to denounce the gods at the cost of incurring their wrath and being potentially annihilated. This angers Zeus (Liam Neeson), who, at the urging of his brother Hades (Harry Potter’s Ralph Fiennes), presents Argos with an ultimatum: sacrifice their future queen, Andromeda, or the Kraken will be unleashed and destroy their city. What Zeus doesn’t suspect this that Hades plans to use the Kraken’s impending return to regain his former power and take over Olympus. It’s now up to Zeus’ demigod son, Perseus (Avatar’s Sam Worthington), his mentor and love interest, Io (Quantum of Solace’s Gemma Arterton), and a band of warriors to find and kill Medusa, and use her head to destroy the Kraken and foil Hades’ plan.

In terms of plot and character development, Clash of the Titans is, for the most part, very loyal to the original 1981 film. The action scenes were just as enjoyable as the ones in Leterrier’s recent Hulk adaptation, the best scene being a pulse-pounding fight with a gang of giant scorpions. Each of the main characters are well-developed and fleshed out, especially Perseus, Io, and Zeus. Ralph Fiennes’ Hades almost steals the show, portrayed as a vengeful, scheming villain who will stop at nothing to get what he wants. 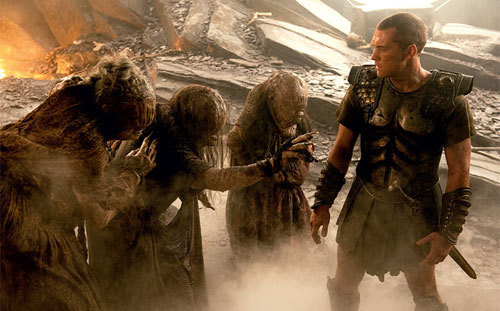 The most controversial topic regarding this film is how it was made for certain 3D showings. Unlike films like Avatar or Alice in Wonderland, which were film with 3-D cameras, this movie is the first of a ever-growing list of movies that are being converted into 3D during post-production. Because of this, the look of the 3D visuals is completely different than with the 3D used in Avatar. Despite most of the critics complaining about how this movie’s 3D looks terrible, I’d have to say that it’s nowhere near as bad as what they’re saying, though it certainly needs to be improved. Most of the time, it looks like regular 2D, but it does give a sense of immersion to those watching the movie in 3D. Bottom line, while not terrible, the practice of 3D conversion is something that could use quite a bit of polishing in order to get the converted movie to actually look like it was made in 3D.

3D opinions aside, Clash of the Titans is an awesome thrill-ride that’s fun to watch and leaves you wanting more after the credits roll. The plot might be slightly different from the original 1981 film, but this remake, in many ways, respects and even gives nods to it’s predecessor. If you are turned off by what people are saying about the use of 3D in this, just go see the movie in 2D instead. Either way, this is one clash you don’t want to miss.

Rating: 8.5/10
Clash of the TitansReviewSam Worthington