If you’ve been following our coverage of Comic-Con’s potential move from San Diego to Anaheim, you know that one of the biggest selling points for Anaheim is their larger convention center. For instance, the Anaheim Convention Center has 815,000 square feet of exhibit space versus the San Diego Convention Center’s 615,000 sq ft. However, a new deal with the Port of San Diego could alleviate that problem. Find out how after the jump.

Sign On San Diego is reporting that the San Diego Convention Center and the Port Commission have come to agreement on a deal that would create a $753 million expansion to the center set to be approved Tuesday and completed by 2015. Why such a large and expensive upgrade? While we’ve been focused on the issues San Diego has accommodating the Comic-Con convention, the problem is more widespread, as Sign On mentions.

The expansion has been sought for nearly a decade. The center began operating at capacity in 2001, shortly after completion of its $216 million first expansion, and has turned away nearly 400 events in recent years. More than 80 percent of those events could have been accommodated if the venue had been larger. 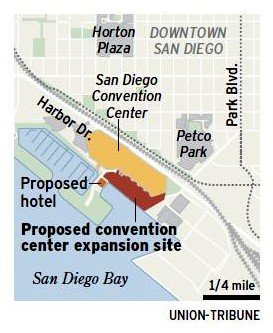 The convention center, just like everywhere else, is a big part of the city’s economy. Despite the large cost to San Diego, the city would benefit in the long run, which is why it was approved relatively easily after they figured out how to acquire the land.


A mayoral task force recommended the expansion in September after issuing a report that showed the center generated $18 billion for the local economy and raised $364 million in tax revenue over the past 20 years.

The expansion would provide an additional 200,000 square feet of exhibit space that would essentially match the Anaheim Convention Center’s current capacity. There would also be a third ballroom (good for screenings) and 100,000 sq. ft. for meeting rooms. One part of the plan that is maybe just as important to the center’s potential for keeping Comic-Con is the 500-room hotel to be build behind the center. I know from experience how difficult it is to reserve a room in the city for the event.

San Diego’s contract with Comic-Con International expires after the 2012 convention, so the 2015 timetable is perfect if CCI decides to stay. The event would only need to hold its ground for two extra years before reaping the benefits. Even though there is a deal in place, it’s still early, so you never know what set back may occur. You can find out more about issues regarding the deal over at Sign On San Diego.

What do you think about this development? Should CCI re-sign with San Diego and wait it out, or move to Anaheim, which is (supposedly) already prepared for the convention?