Why not? With everyone else throwing their hat in the ring, it was only a matter of time before Los Angeles decided they wanted to host the Comic-Con International convention when San Diego’s contract is up in 2012. Similar to Anaheim, the city’s convention bureau has gone to Facebook to drum up support. While I’ve heard LA among the several cities bounced around as possible options for the CCI group, I really didn’t think they’d go for it. I guess I was wrong. Check out the details after the break.

The homepage for the Los Angeles Convention and Visitors Bureau (DiscoverLosAngeles.com) now has a link to Facebook Fan Page they created called “2013: Los Angeles Welcomes Comic-Con”, though their URL name choice is genius: ComicCon2013. It’s as though they knew other cities would jump on the Comic-Con bandwagon, so they snatched the perfect name. The page looks to be created yesterday, so it’s not hard to imagine they just took the idea from Anaheim. Geez LA, you already took the Angels, can’t you let Anaheim have anything? 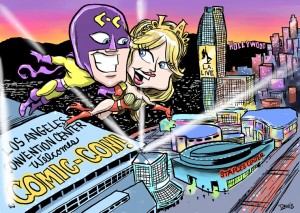 The superhero themed fan page has pretty much what you would expect, including a “WHY LA?” tab with 10 reasons the yearly comic book convention should be held in La La Land. I find the subliminal inclusion of fast food restaurant In ‘N Out to be both disturbing and impressive. The page really tries to sell Los Angeles as a comic book Mecca, and goes into detail about the modernization of the infamous LAX airport. There’s even a video on the topic.

Of course, all of this may be a moot point now that the San Diego Convention Center looks to be moving forward with a major expansion. The San Diego Facebook page also has 9,000+ fans compared to Anaheim’s 2,300+ and LA’s 800+, though LA’s numbers have come in less than two days. So, do you think Los Angeles would be a good host for Comic-Con?
AnaheimAngelsComic-ConFacebookLos AngelesSan Diego