In the twelfth episode of the final season of ABC’s LOST, Alternate Desmond starts his crusade, Libby is back in action, we get another teary reunion and a big answer, and someone dies! Find out all the juicy details of this week’s episode, “Everybody Loves Hugo”, after the break.

In the alternate universe (flash-parallels as they are sometimes called), Hugo is given a Man of the Year award, and the presenter is Pierre Chang (Miles’ father). Hugo is chided by his mother for not trying to find a woman, so she sets him up on a blind date with a Rosalita. Rosalita stands him up (or so it seems), but Libby surprisingly appears and sits with Hugo. She tells him that she knows him, though he doesn’t remember her. Then her doctor takes her to a van that is for the Santa Rosa Mental Institute (where Hugo and Libby attended in the original timeline). Depressed, Hugo eats at one of his Mr. Cluck restaurants, where he bumps into Desmond. They talk, and Desmond tells Hugo to find out how she knows him, even if it’s crazy. With a hefty donation, Hurley is able to see Libby. She tells him she got flashes of another life (on the Island) when she saw his Mr. Cluck’s commercial. Hugo still doesn’t remember, but he takes her out on a date. There, she kisses him, and he finally gets memories as well. Desmond looks on approvingly from afar. Desmond next goes to the school John Locke is teaching, and runs him over with his car, never stopping. 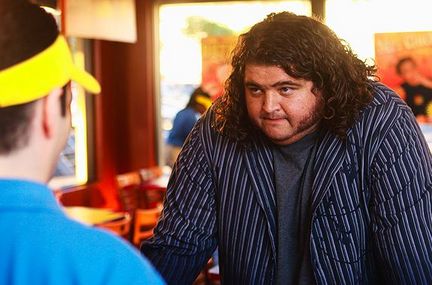 In the original timeline on the Island, Hugo visits Libby’s grave, wishing she would talk to him like the other dead people who can. Instead, Michael (who died on the freighter) tells him that they can’t go on with their plane to blow up the plane (which, in theory, would force the Man in Black to remain on the Island). Hugo tells Ilana this, but she is dead set on completing her mission. Unfortunately, when she sets down her bag of unstable dynamite, it explodes, killing her (goodbye, Ilana). While Hugo and Jack take this as a sign they should thing of something else, Richard is just as dead set on this mission. When they all go to the Black Rock to get more dynamite, Hugo blows it up. However, Richard is smart, so he plans to go back to the Others barracks, where there are grenades and such. The group is split on what to do, so Richard, Ben, and Miles go that way, and Hugo, Jack, Sun, and Lapidus go to talk to Locke. After Jack tells Hurley he’s learning to let go and trust Hugo, they hear the infamous whispers. Hugo says he knows what it is, and he eventually finds Michael, who confirms that the whispers are those who have died but can’t pass on as punishment from the Island. Michael apologizes for killing Libby (which was way back in Season 2). They eventually meet up with Locke’s group.

What about Desmond, you ask? Well, long story short, Locke takes him out to a well (after they see that mysterious boy that frustrates Locke). A long time ago, people made wells to find answers to the strange ways of the Island, but Widmore doesn’t want answers, just power. Then Locke pushes Desmond down the well, presumably in hopes of killing him (Desmond’s in the teaser for next week, don’t worry).

Things are coming together fast now. We still haven’t found out what Desmond’s purpose on the Island is yet, but it worries Locke enough to try to kill him. Alt-Desmond is on his crusade to get everyone to remember the original timeline, though his methods range from sweet (Libby and Hurley finally united) to insane (running over Locke, very similar to Locke’s old car accident before the crash). The big picture is still unclear, since even if everyone remembers and even gets together, what do they do now? The Island is underwater. The show keeps giving us great cameos of old character, like Chang and Michael in this episode, but we also got our first big answer: The whispers. The delivery felt a bit clunky, but at least we know now.

What did you think about the episode and everything we learned? Stay tuned for next week’s episode, “The Last Recruit”.