You may remember the website Hukilau that we first reported on in January. The service helps provide low budget projects, like independent films and alternate reality games (ARGs), funding through a concept known as “crowdsourcing.” Now the company has a made a movie slate for your Apple iPad. Check it out after the jump.

The free iPad app simulates a film slate, also known as a clapperboard, which is a device used in films to mark the beginning of a scene being filmed. The iconic movie prop lists information on what’s being shot, like scene information, production title, and director name. The Hukilau app has all these fields as well, which can be changed just as easily. When you shake your iPad, it makes the classic clapping sound. 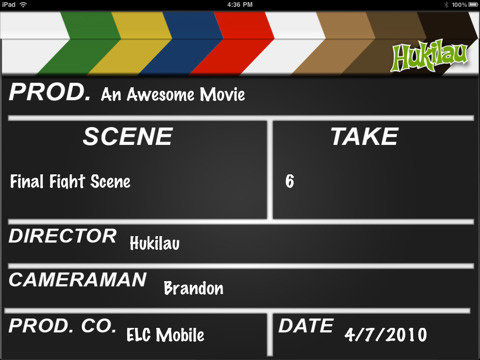 Whether this will truly be useful to amateur filmmakers remains to be scene (get it?), and this could be just another example of technology trying to replace standard operating practices. The app can be downloaded from iTunes here.
clapperboardHukilauiPadslate