After over 200 episodes in 14 seasons, Comedy Central’s South Park still has the ability to ruffle feathers and create cultural chaos. In their latest episode, titled “200”, has a subplot that features the prophet Mohammed (also spelled Muhammad), the most important figure in Islamic faith next to Allah himself. The show caused quite a stir, in which censorship, threats, and word of mouth took center stage. Now, someone is trying to push even harder to tempt Muslim extremists. Find out how after the break.

The episode (and the one before that, “201”) upset many Muslims because it made fun of one of the interpretations of Islam where depictions of the prophet Mohammed are strictly forbidden. The past decade has seen some fringe groups in the religion threaten and even go through with retaliation on those who draw or otherwise animate the prophet, even if the artist is not Muslim. So, of course, one such group has done that with the South Park episode.

Comedy actually censored the images with black bars, which seemed to be part of the joke. However, showrunners and creators Matt Stone and Trey Parker have said they didn’t intend for it to be censored, and weren’t happy. The issue has (as it usually does when it comes up) sparked the discussion about religious beliefs versus freedom of speech, among other things. Jon Stewart even weighed in on the subject last week.

Now someone is taking the issue one step further by trying to create a “Everybody Draw Mohammed Day”. The day is being organized on Facebook, and is planning to fall on Thursday May 20th. The group behind it is called “Citizens Against Citizens Against Humor” or CACAH (tee-hee), with the intention of promoting our First Amendment right to free speech, which includes art. There are over 5,000 confirmed guests, and while some of the images on the page are easily trying to be offensive, the organizers insist that their intention is not to offend. Check out their flyer below.

What do you think about all this craziness? Who’s in the wrong here? Was Comedy Central being too cautious (read: wussies), or did Parker and Stone really go over the line? The show has a abrupt way at making social commentary, but many people only see the “abrupt” part of the equation. 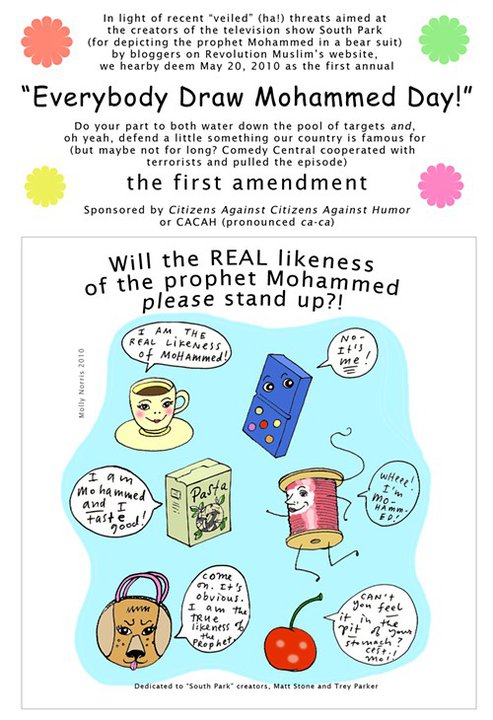