This season we at MovieViral have been providing weekly ‘recap and reviews’ for each episode in the sixth and final season of LOST. Instead of going through a full recap for the series finale last night, I’ll just give you a few of my thoughts (obviously spoilers abound), then open it up for discussion in our comments. What did you think of the finale? Was it a fitting end? What questions do you still have?

It’s hard to believe it’s all over after six years, multiple dimensions and time shifts, flashbacks, flash-forwards, and even flash-sideways. We finally got a resolution to centuries long fued between the MiB and Jacob, as well as to what the hell the alternate reality was. Here are my thought below, including facts, opinions, and just observations.

– On the Island: Jack realizes Desmond is the key to killing Fake Locke, so he lets Locke go along with his plan to make Desmond go into the light in the cave. Desmond gets down there, and it’s some structure most likely made by the same Egyptians who made the four-toed statue. There’s a big circle filled with water and light, and something that looks like a big plug. Desmond removes it, the light turns red, and the Island goes to Hell. Jack and Locke are both mortal, and eventually Jack kills Locke, but the Island is still falling apart, so he ends up going back down and replacing the plug, fixing everything before eventually dying of his wounds. Oh yeah, and he made Hurley the new protector of Island, who then asked an honored Ben to help him.
– The Alt Reality: The joke of the series in the first few seasons was that the Island was actually purgatory and everyone was dead. Funnily enough, that’s actually the concept of the alt reality. They survivors can’t pass on until they find each other, so they created this fake world to bring them together.
– My thoughts: Although I hated the alt reality revelation at first, I grew to understand and appreciate it as the only way you can provide closure to the audience without going through a laundry list of explanations for every little question. They went with emotional closure as opposed to loose-ends closure, which makes sense to me. 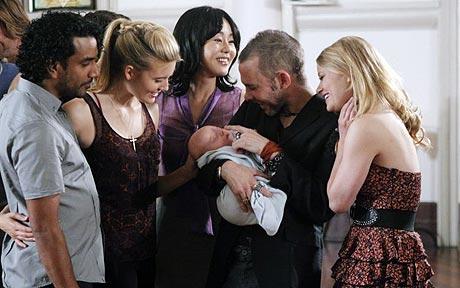 – I love how the final scene mirrors the pilot’s opening scene.
– It sounds like Hugo made a great #1, and I’m glad Ben got to help him out. It looks like Ben chose purgatory over moving on. I don’t blame him.
– I knew they were short-lived characters, but I guess Eko, Ana Lucia, Art, Nikki and Paulo weren’t important, because they weren’t part of this purgatory club.
– Scenes that made me cry: Jin and Sun remembering, Claire and Charlie remembering, and Sayid and Shannon remembering. I teared up a little at the end too.
– Was it Jack becoming the new protector, or Smokey’s super punch that made Richard start to age? I’m just glad he finally got the desire to live and can live normally now.
– Rose and Bernard need their own sitcom. Miles and Sawyer need their own buddy cop show. Hugo and Ben need their own spin-off where they are in control of the Island and get into hilarious hijinks.
– There are still A LOT of unanswered little questions, but I think I’m OK with it.
– Finally, the final scene with the crashed plane that had the credits underneath. What was that? I heard one theory that it was the Ajira flight, thus meaning Kate, Miles, Sawyer, Frank, Claire, and Richard didn’t make it off the Island. That’d be interesting.

So, what did you think of the LOST series finale? Tomorrow we’ll have a special LOST podcast where we’ll dissect this episode and the series overall much more.

Update: Our podcast is now live! Click here to listen in and learn some secrets not revealed in the finale!