You may have noticed that an ABC show ended recently answering fewer questions than it asked. No, we’re not talking about Lost, but another ABC show, Flash Forward. Fans think it ended too soon and are going to let ABC know how they feel on June 10th.

Flash Forward was meant to be ABC’s ace in the hole, a show that would replace the hugely successful Lost, but it was not to be. The series showed a lot of promise, working on the premise that everyone in the world blacked out and had a “flash forward” of their future for 2 minutes and 17 seconds.

As the series progressed and the failed viral expanded, the show asked some very interesting questions about how you would mold your day-to-day life to match where you seen yourself in 7 months time. Unfortunately, the show didn’t expand enough on the premises set-up in the early episodes, and the viewing figures dwindled to a third of the pilot episode. ABC cancelled the show, so a Season 2 will never see the light of day, and the fans are not happy. Anyone who watched the show from start to finish will know that the ending left a lot unresolved, and the fans have decided to take matters into their own hands. 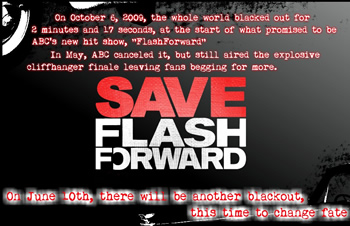 On June the 10th, fans will take matters into their own hands in a public display of protest against ABC, which will see fans from across the world “blackout” for 2 minutes and 17 seconds. Check out the website here. Fans will congregate in predetermined areas and re-enact the scene where the world “flashes”. The most significant of which will be in front of ABC offices in New York, Los Angeles, Chicago, Detroit and Atlanta. They have also arranged for 20,000 friendship bracelets (a significant item in the Flash Forward universe) to be sent to Stephen Mcpherson, President of ABC.

It’s been very well orchestrated with several countries joining the protest and it makes you wonder if ABC realized how well liked the show was in fans eyes? It is very reminiscent of the cancelling of Firefly, when fans (browncoats) organized online petitions to get a second season made. It was a bit of a bittersweet story because they didn’t get their second season, but they did get a movie, Serenity, which was hugely successful. In fact, the only successful attempt similar to this one is when fans of CBS’s Jericho saved the show from cancellation (though for only one more season) thanks to nuts.

I wish everyone who participates the best of luck and would love to hear from anyone who goes along. Leave your experience of the event in the comments section and let us know how it was.
ABCFlash ForwardFlashForwardProtest