In what may be one of the more timely anniversaries to get a Google Doodle, today is the 100th birthday of Captain Jacques-Yves Cousteau (1910-1997). Cousteau was a pioneer in marine research and preservation, so much so that Congress passed Resolution 518 “honoring the life of Jacques-Yves Cousteau, explorer, researcher, and pioneer in the field of marine conservation,” on June 8th. He also had a significant influence on film and television.

Captain Cousteau led a very full life, which included him being a French naval officer, an explorer, author, and even a filmmaker. Cousteau made great documentaries over the span of over 30 years, and had several television shows. In fact, Cousteau won many awards for his work, including three Oscars, two for Best Documentary and one for Best Short Subject, Live Action. His legacy was such that there are countless pop culture references to him. 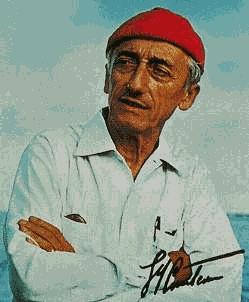 This anniversary of Cousteau’s birth seems especially relevant given the recent BP oil spill scandal. He created the Cousteau Society in society in 1973 to support exploration of the seas, helping people “understand and appreciate the fragility of life on our Water Planet”. While the group has spoken out about the recent spill, I’m sure Cousteau himself would have been deeply affected by it.

Interestingly, this Google Doodle is exclusive to the United States. The rest of the world gets a World Cup Doodle (seen below) along with the specialized Google footer we already reported on. Just goes to show how much Americans could care less about soccer.